Carrollton, Tex. – Catherine Monson, CEO of FASTSIGNS International, Inc., has been voted the 2018 Top Female Executive in an award sponsored by the North Dallas Business Magazine. This recognition is designed to honor influential female business leaders in North Dallas, based on public and peer nominations. Monson was presented the award during the Top Female Executive Awards Luncheon on March 7 at the Bent Tree Country Club in Dallas, Texas.

“The 16 nominees of the North Dallas Business Magazine’s 2018 Top Female Executive Awards are an outstanding group of accomplished women who are making a positive impact in the world every day,” Monson said. “I’m honored to be recognized and thankful for the support of the community and the entire FASTSIGNS® network.”

A California native, Monson relocated to the Dallas area in 2008 when she became president and CEO of FASTSIGNS International, Inc., the franchisor of FASTSIGNS with more than 675 locations worldwide. 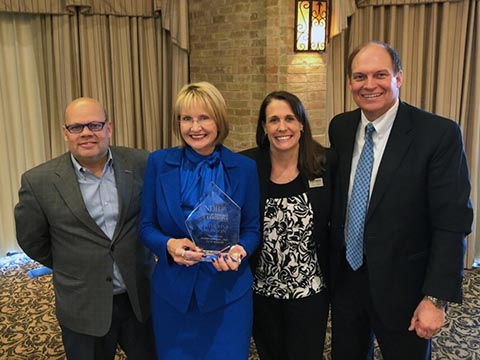