Mex, Switzerland – The inventor of the revolutionary THQ printing technology took away the Prix de l’Innovation at the competition for the best work in flexographic printing. The jury also gave awards (FlexoStars) to four Bobst Group customers for the quality of their work in the corrugated cardboard category.

“Before THQ technology was invented, printing professionals using flexography couldn’t reproduce an image’s full richness and emotion on a product package. The color range was restrained and ordinary printing on corrugated cardboard was impossible due to the fluting. Reproducing a motif in color necessarily meant reducing quality. THQ has changed all of that,” said Didier Guenu, founder of Graphilabel, in Rheims, France, who received the Prix de l’Innovation on behalf of the company during the FlexoStars competition on December 14, 2017, in Saint-Malo, France. Organized by ATF Flexo (the French flexography association), the awards honor the best flexographic printing work every year.

Dubbed THQ, the technology developed by Graphilabel produces printed images with reproduction quality unequalled in the packaging market. Bobst has partnered with Graphilabel since 2015 and holds exclusive rights to this process for corrugated cardboard. Under the name BOBST THQ FlexoCloud, Bobst markets a flexographic post-print solution devoted to corrugated cardboard and available on a wide range of the brand’s new flexographic post-print machines.

Thanks to the exceptional quality of the images it can print, BOBST THQ FlexoCloud technology is opening flexography to markets previously restricted to offset and photogravure. The rendering can reach very high definition far greater than 350 lines per centimeter, and the cheaper tools associated with the flexographic process allow very competitive production costs for short and medium runs.

“Thanks to the THQ process, now flexography can also meet brand owners’ new needs for package authentication and traceability,” said Didier Guenu, whose company has been active for more than 30 years in encryption of fiduciary documents and security documents. A color separation algorithm allows very effective anti-counterfeit printing using “nano messages” invisible to the naked eye.

BOBST THQ FlexoCloud technology, which can be installed on several of the brand’s flexographic press and combination models, relies on three key elements: the THQ ceramic cylinders (supplied by Bobst), the THQ CMYK inks and the varnishes for very demanding jobs (supplied by Siegwerk exclusively for THQ FlexoCloud customers) and the THQ printing plates (supplied by Graphilabel).

“It’s a flexographic solution that’s very easy to use on corrugated cardboard and provides crucial advantages for users of flexographic equipment,” explains Dominique Ravot, Sales and Marketing Director at Bobst Lyon. These advantages include:

Remarkable wins for Bobst customers at the FlexoStars 2017

In addition to the Prix de l’Innovation, the FlexoStars competition awards the best flexographic printed work in 15 different categories of packaging and labeling. For this 31st edition, 124 works were submitted for assessment by the jury.

This year, Bobst flexographic machines racked up a remarkable record of achievement. Of the six awards presented for printing on corrugated cardboard, four were awarded to Bobst customers:

Launched by the Group during a technical seminar held by Bobst Lyon in spring 2017, BOBST THQ FlexoCloud technology immediately impressed flexography experts and the brand’s customers with its high performance.

Promotion of this process has stimulated a great deal of interest on the market, and several orders are in process. In 2018, Bobst will deliver to its first customers, who will then have the opportunity to take home awards from the next FlexoStars event, thanks to their work done in THQ. 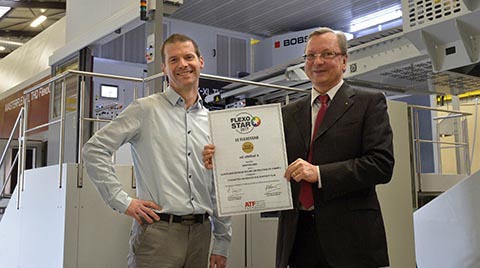