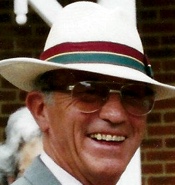 The death of Jimmy Marr, at the age of 76, has just been announced. Jimmy was Managing Director of Contract Papers until his retirement in 1998.

Martyn Eustace, Managing Director of Two Sides and Print Power, and a former colleague of Jimmy’s, said, ‘I joined Contract Papers in the early 1980’s and Jimmy, very much a legend in the world of paper and magazine publishing, became a steadfast colleague and friend. Together with Robert Savory and George Dean, Jimmy formed part of a management team of the renamed Howard Smith Paper Group which moved operations to Northampton in 1989 and entered an unrivalled period of growth. Jimmy’s gruff, cigar nurtured voice always made good common sense and his support for me and others was unfailing. In an industry once teaming with characters he stood shoulder to shoulder with them. He was not a corporate man and gave cursory attention to corporate double-speak. He was his own man and valued for that; trusted by colleagues, suppliers and customers alike. Thanks Jim for a great time.’

Donations can be made to www.prostatecanceruk.org, Flowers can be sent to Rowland Brothers, The Parade, Old Coulsdon, Surrey CR5 1EH