Founder of C.P. Bourg Passes Away

Mr. Bourg died Sunday, November 16, 2014 in Boston, Massachusetts, not far from the company’s US headquarters in New Bedford.

Christian-Pierre Bourg started his company (C.P. Bourg S.A.) in 1960. Over the past few years, even though he no longer oversaw day-to-day company business, he nevertheless still made a point to go to his office every day. 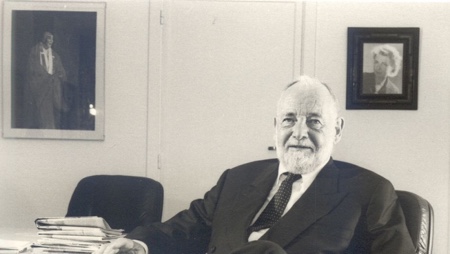 The announcement of Mr. Bourg’s passing has deeply affected all employees and those who worked with Mr. Bourg.

Christian-Pierre Bourg held a master's degree from Solvay ULB and was considered a dynamic entrepreneur and visionary in the field of Graphic Arts. He succeeded at creating a small, yet successful multi-national company. Up to 90% of the products developed and manufactured in Ottignies-LLN (Belgium) are exported around the world.

Today, C.P. Bourg has a worldwide presence via a network of 150 distributors in nearly 100 countries, a US-based corporate office and several sales offices in France, Luxembourg and Germany. Products are also distributed by major names in the world of digital printing: Xerox, HP, Kodak and OCE. Today, the group has more than 350 employees.

With over 80,000 clients, C.P. Bourg’s products are known for their innovation, efficiency and excellent quality.

Christian-Pierre Bourg leaves behind a deep imprint on the economic history of the Brabant-Wallon region of Belgium.  He will be remembered as an exceptional businessman.