BRAZIL - Copiadora Nacional, a 2013 Scodix Award winner, has been named the 2014 Fernando Pini Award recipient (the most important prize for graphic arts in Brazil) in the Menu category. The digital service company, known for differentiating itself through innovation, only installed its first Scodix system in April 2013. Since then the company has experienced an immediate impact in their business and the expectations of their clients.

“We originally acquired the Scodix system as a means of adding value to our clients’ projects. The overall innovation and the expectation of further impressing my clients with this new technology was too great to pass up,” notes owner Geraldo Trigueiro. “Scodix immediately not only became well accepted in our marketplace, it evolved the standard to which others needed to match. For example, by applying polymer print to restaurants menus we created a stir. The final results pushed restaurant owners throughout our region to rework their menus. We won with one of our menus.” 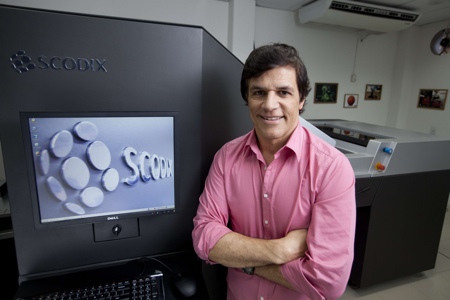 “In addition to restaurants, we also target marketing agencies. Directly or indirectly, we serve Brazilian leaders such as Petrobrás, Shopping Recife, Grupo JCPM, Odebrecht, Moura Dubex, Baterias Moura, Coca Cola, Queiroz Galvão, and Vitarella. Not only has Scodix differentiated us into a major competitive advantage, we’ve also benefitted from cost reductions, time optimization, and of course new clients. In addition, Scodix continues to garner us renewed brand awareness and a very unique status in our market. And, it’s become a new and profitable revenue stream.”