RED BANK, NJ - Diversified Graphic Machinery, the global leader in print enhancement systems, including its exclusive Foildex™ Cold Foil technology with Indexing and Filmdex™ Cast and Cure™ systems has announced the promotion of Paul Peyrebrune to the newly created position of Executive Vice President and Dan Quenzer to Vice President of Sales.  The announcement was made by Michael DeBard, President, DGM during PRINT 13.

“We continue to take positive and progressive steps in strengthening and expanding our organization,” DeBard said.  “I am delighted that Paul Peyrebrune, with his impressive history of accomplishment will be able to use his extensive expertise to seek out new opportunities and assist me with corporate development, strategic planning and future DGM expansion plans. Dan Quenzer, who takes over as Vice President of Sales will be responsible for DGM Foildex™ Cold Foil and Filmdex™ UV film Cast and Cure™ systems to the world packaging market. These two key appointments with their expanded responsibilities significantly strengthen DGM’s ability to better serve our customers.”

Peyrebrune, who joined DGM in 2012, was previously Vice President of Sales for DGM’s Manufacturing Division.  Prior to this, Peyrebrune spent ten years with Komori as a Senior VP of Sales and VP of Sales, National Accounts and was President and CEO of Xeikon America, a position he held for five years and earlier was Western Regional Director for KBA. Peyrebrune, who also had a distinguished career with Manroland and its predecessor companies including Rockwell International/Miehle, holds an M.B.A. from the University of Chicago.   He will be located in DGM’s West Coast regional offices in Oceanside, California.

Quenzer, who also joined DGM in 2012, has over 25 years of senior sales management, operations and service experience with major press manufacturers. He was previously Western Regional Sales Director for Mitsubishi Lithographic Presses, District Sales Manger for Komori America Corporation and General Manager of Western Regional Sales and Service for MAN Roland. He will be located in DGM’s regional offices in Ocala, Florida. 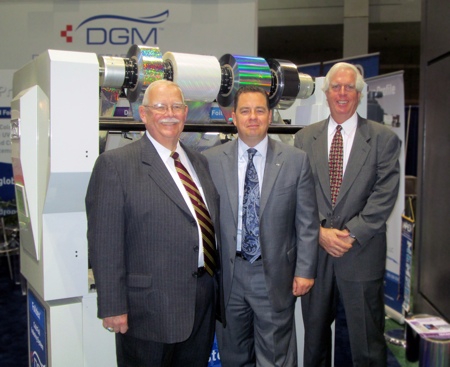