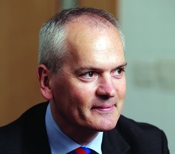 Informa Exhibitions today announces that Patrick Martell, Chief Executive of St Ives Group, has been appointed as Ipex 2014 President. In this role, Patrick will chair the Ipex 360 Committee, which will be a visitor focussed steering group that will see representatives from the whole value chain, including agencies, small to large print service providers and end users of print, meet in the coming months to discuss and advise on the successful delivery of the 2014 show (24th – 29th March 2014, London ExCeL, UK).

Commenting on his appointment as Ipex 2014 President, Patrick Martell says: “It was an honour to be asked to undertake the role as Ipex President to support the Ipex 2014 organisers in delivering a world class ‘must attend’ event that meets the needs of visitors and exhibitors alike. Ipex 2014 is an international industry showcase on the future of print, demonstrating its crucial role in contemporary marketing communications, which aligns perfectly with St Ives’ vision and business objectives.

“In my role as Ipex President, I will be working closely with the Ipex 360 Committee to ensure the extensive and unique content programme reflects the print industry’s latest issues and trends. The show’s many visitors will benefit not only from the technologies at the show, but also have the opportunity to see, learn and be inspired by the latest applications which are helping to ensure print delivers measurable results as part of the multi-channel marketing mix.”