Washington, DC – In a ceremony attended by her family and friends along with GPO employees, business partners, and other stakeholders, Davita Vance-Cooks took the oath of office as Public Printer of the United States today.  She was sworn in by Judge Gerald Bruce Lee of the U.S. District Court for the Eastern District of Virginia. President Barack Obama nominated her for the position in May 2013 and she was confirmed by unanimous consent of the Senate on Aug 1, 2013. 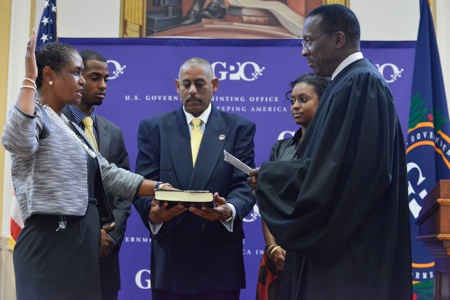 A graduate of Tufts University with an MBA from Columbia University, Vance-Cooks brings more than 30 years of private sector and Government managerial experience to the position of Public Printer, including nine years as of senior and executive management at GPO.  Her tenure as Acting Public Printer from January 2012 to August 2013 is the longest in GPO’s history.  Her confirmation marked the swiftest Senate action on a Public Printer nominee in nearly 20 years.

While Vance-Cooks is the 27th person to hold the title of Public Printer in the agency’s history, she is the first African-American and the first woman ever to be nominated and confirmed as Public Printer.  At today’s swearing-in ceremony, master of ceremonies John Crawford, a GPO employee since 1966, remarked, “In my time here I have served under eleven different Public Printers.  They each had their individual characteristics.  But every one of them was addressed as ‘Mister Public Printer.’  Today, that is going to change.”

Vance-Cooks spoke of the continued need for change, saying “I believe that change brings opportunities, and the future as represented by the digital world brings unlimited possibilities.”  She told the assembled audience, “I am awed by the circumstances which brought me to this time and place in GPO’s history, and humbled by the opportunity.  This is a blessing that I do not take for granted because I know that to whom much is given, much is expected.  I willingly give to GPO all that is required of me to ensure its continued success.”