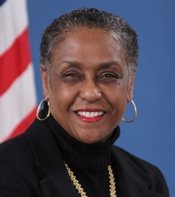 WASHINGTON - The U.S. Senate has unanimously confirmed Davita Vance-Cooks as Public Printer.  With more than 30 years of private sector and Government experience, Vance-Cooks has served as the Acting Public Printer since January 3, 2012.  She is the first African-American and the first woman ever to be nominated and confirmed for the leadership of the U.S. Government Printing Office (GPO), which opened its doors for business on March 4, 1861, the same day Abraham Lincoln was inaugurated as President.  With the Senate's approval she becomes the 27th Public Printer of the United States.

"It is a great honor to have been nominated by the President and confirmed by the Senate to lead the GPO," said Vance-Cooks.  "I look forward to working with everyone who shares a stake in our historic mission of Keeping America Informed as we continue transitioning our products and services to meet the needs of Congress, Federal agencies, and the public in this digital age."