Standbuilder Purchases an AE Sewing Machine Hot on the Heels of a Trotec 4000 Laser Cutter, Both from CMYUK 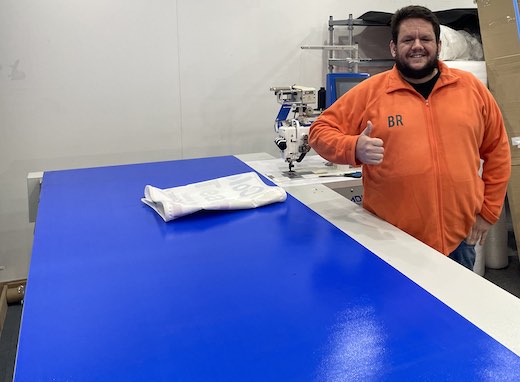 “We went to a recent CMYUK open day to look at AE Sewing Machines. We wanted the
easiest and best way to apply Keder to our tension frame graphics and with this machine, we’ve got it. It’s so user-friendly, you don’t have to be a skilled stitcher to use it. The operators that run the VUTEk QS3 Pro will also use the sewing machine as well, so we don’t need to employ new staff,” says Bruno Roquette, MD, Standbuilder.

Advance Sewing Automation V-TYPE/310C Digital, 2-Needle Lockstitch is a next generation conveyorised system that is designed to produce banners, flags, and tension framed soft signage. It provides the highest quality finish, ensuring that flat seams are achieved for Silicon edge inserts, Velcro attachment, banner, and flag hemming.
The new V-TYPE conveyor features a brand-new blue silicone conveyor belt for consistent transportation of the fabric as it's being sewn, ensuring that the automated Keder function produces perfect mitred corners without the need to stop, thus optimising productivity.

Evolving business
Standbuilder is a family-owned company based in Colliers Wood, South London. In operation since 2014, it started off providing technicians to the exhibitions market, a sector well known to Bruno Roquette and his brother, Francisco who prior to setting up on their own, had worked as exhibition stand builders. Clients were impressed with the reliability of the business and soon started asking the brothers to manufacture the stands as well.

In-house printing
Standbuilder had always used outside suppliers for its digital printing work, but 3.5 years ago installed a Mimaki print and cut machine in-house. “This was a back-up that allowed us to reprint at the last minute if something went wrong. It was our freedom printer because it also meant if we wanted to take on last minute work, we could without the need to call in outside suppliers,” says Bruno.

As the company has grown, so too has its in-house printing capacity. It recently installed a VUTEK QS3 Pro 3.2m UV LED printer allowing it to produce its own soft signage in-house.

“We are still only printing for our own stands, but we are doing more printing than we have ever done. We’ve never printed fabric before, but our new sewing machine will allow us to add the silicon edging in-house that will make the whole process much quicker,” says Bruno.

Greater in-house capabilities
This investment follows on from the installation of a Trotec 400 laser cutter purchased from CMYUK earlier in the year. Prior to this investment Standbuilder was contracting out all its laser cutting work.

“Every time we were let down with our laser work, we’d say we’ll need to think about bringing a cutter in-house. The final straw came when we received some letters that had been cut to the wrong size, it was in the week that we had visited the CMYUK Open Day in Shrewsbury. We saw the Trotec Speedy 400 there and placed the order. We were spending about £1,000 per month on outsourcing cut letters every month, which we realised would cover the materials as well as the machine finance,” says Bruno.

The Trotec Speedy 400 is the world’s fastest laser cutter and engraver. Its OptiMotionTM motion control means that cutting jobs are up to eight times faster than comparable laser machines on the market, while its High Dynamic Laser Range (HDLR) technology ensures that even the smallest of details and letters are acutely sharp.

Almost immediately, the convenience of having the Speedy 400 in-house has been demonstrated. Standbuilder produced last minute handheld supporter signs for the Conor Benn Vs Chris Eubank Jr boxing match. Those walking the red carpet could signal which fighter they were rooting for by selecting the appropriate sign – all of which added to promotional furore surrounding this hotly anticipated event (since been cancelled).

“We have a CNC router as well, but you can’t use it in the way that you use a laser cutter. The finish on the Trotec and the speed at which it operates is very impressive. It’s a wonderful creative tool with which you can create many unique effects that you can add to an exhibition stand to make a really significant difference,” he says.

Standbuilder has been working with CMYUK ever since it was let down by a previous supplier 3 years ago. Says Bruno: “CMYUK is very reliable, and the service is great. The new equipment does everything that it says on the tin. We are very happy.”