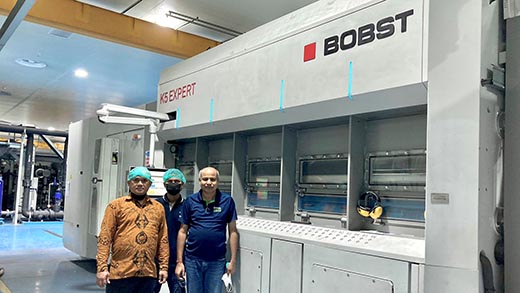 The new machine complements the existing EXPERT K5 3300mm which was installed in 2019 and together the two machines incorporate a host of BOBST unique process innovations including AluBond, AlOx and DarkNight.

PT Polyplex Indonesia is part of the Polyplex Corporation which has had a relationship with BOBST since 2015 and has 4 EXPERT K5’s across their production sites in Indonesia, India and USA. The Indian multinational company which started in 1988 has 7 manufacturing locations in 5 different countries and is a leading PET Film manufacturer and supplies customers across the globe. PT Polyplex Indonesia incorporated in 2017 has an annual turnover of 160 million USD, nearly 600 staff and operates primarily in the Flexible Packaging sector.

BOBST Unique Innovations
Both machines at the Indonesia site incorporate a 700mm coating drum, which is unique to the EXPERT K5 and the largest in the industry resulting in less aluminium consumption and maximum productivity and production cost savings.

Also unique to BOBST is the AluBond process which is on both machines and was initially developed to increase metal adhesion and dyne level on the most commonly used film substrates but is now fast becoming the standard metallizing process for polyolefin based PP substrates due to its ability to increase barrier levels on these film types.

The DarkNight® process which is installed on Polyplex’s latest metallizer is designed to achieve high barrier metallized films at a lower cost due to the fact that it eliminates the need to use high Optical Density levels which is usually required for high barrier applications. An enhanced barrier performance is achieved by reducing defects during the metallization process. Working in conjunction with BOBST Hawkeye, the process provides a new approach to defect reduction and is a major step forward in the journey towards full aluminium foil replacement with high barrier metallized films.

Commenting on the investment, Amit Prakash. Managing Director & PCH for Thailand/Turkey/Indonesia Operations Unit at Polyplex said “We originally chose the EXPERT K5 due to the large capacity and fast speed with good output quality. The BOBST machines provide higher production with less defects giving better quality metallized film and when we needed to increase capacity, we didn’t hesitate to purchase a second EXPERT K5. We had good support from local BOBST experts for installation and start-up and our operators are well-trained on the machine. We look forward to continuing our relationship with BOBST in the future”.