Off to the Country! Big Project at Molson Coors: KHS Demonstrates its Line and Packaging Expertise 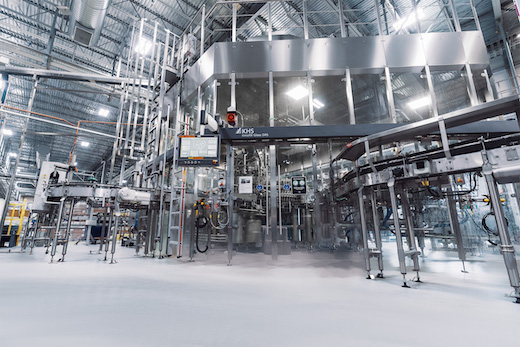 Where breweries were once a fixed feature of inner cities all over the world, today more and more companies are abandoning their confined urban premises in favor of the surrounding countryside. Here, they have room for expansion – and for new and highly flexible filling and packaging technology from KHS.

Founded by British settler John Molson in 1786 in Montreal, Molson Coors – as it’s been called since its merger with American big player Coors in 2005 – is the oldest brewery in North America and was for a long time the largest in Canada. Rebuilt and extended following the Great Fire of Montreal in 1852, for 237 years it occupied 28 hectares in the neighborhood of Centre-Sud on the banks of the St. Lawrence River. This year the new brewery moved to Longueuil on the opposite side of the river where it has over 140 hectares of space for future possible expansions. The new site also provides easy access to various amenities and infrastructures, including top-quality water, highways, natural gas pipelines and ports.

The Molson Coors facility in British Columbia, the westernmost province of Canada, did exactly the same two years ago. From the metropolis of Vancouver, home to the brewery since 1953, the production site was moved to Chilliwack in Fraser Valley about 100 kilometers to the east. There are practically no limits to its future growth with 36 hectares of land at its disposal – five times the area the brewery had in the middle of the provincial capital. Opened in September 2019, the site is just a stone’s throw from the northern border of the United States and has a direct link to the Trans-Canada Highway. It’s thus in the perfect position to fulfill its task of supplying the west of Canada and the USA with beverages. The other site conditions are also ideal: in the largely agricultural region hops are grown – just 15 minutes from the brewery – that give many of the beers brewed here their distinctive taste. What’s more, tucked in between Fraser River and the Cascades, a mountain range that stretches right down to California, the water here is of excellent purity and quality – which is essential for a brewery.

Long-term partnership
What’s also crucial for a beverage bottler who wants to create totally new production capacities out in the country are state-of-the-art technology and a reliable partner who can be fully depended on during installation, commissioning and day-to-day operation. It was thus good that in opting for KHS the brewery has a partner at its side that it has trusted for many, many years. “Molson Coors and KHS have had close ties for more than 100 years,” says David Hamel, general operations manager at the new production plant in Chilliwack. He himself has ‘only’ been with the company for 18 years but at his earlier place of work in Montreal worked in part with systems built by KHS’ predecessor companies in the 1970s. “I’ve been able to see with my own eyes how these machines from way back in the past have technically developed into the highly modern filling and packaging lines of the present day.” He also finds the fact that his employer and a high-tech supplier can look back on such a long history “a strong statement”.

It’s thus only logical that Molson Coors has now procured not one but three lines from the Dortmund systems supplier for its greenfield project. One of these is a new glass line that fills up to 36,000 341-milliliter bottles per hour where the focus was very much on the future viability of its labeling and packaging options. A modular Innoket SE labeler was therefore included that processes different types of label and can be supplemented by other modules as and when required. Another special feature of this particular line is the packer, a KHS Innopack TLM that has been implemented in close cooperation with packaging specialist Schubert from Crailsheim, Germany. The blocked system, comprising a packer and erecting and closing modules, is convincing with its great flexibility. It not only processes trays but also folding cartons (what are known as RSC cartons), baskets and craft cartons, a fully-enclosed variant made of solid carboard. As many different types of carton can be folded, glued and filled on it, the machine is a real Jack of all trades.

Adaptability required
The variety of products that already distinguishes Molson Coors is by no means exhausted. “If there’s one thing that doesn’t change, it’s the fact that we constantly have to change,” David Hamel laughs. “That’s why we need technology that can adapt.” On the one hand, Molson Coors already produces a vast portfolio in Chilliwack, consisting of 42 different brands and more than 250 SKUs. Besides classic products and global brands such as Coors Original, Coors Light and Molson Canadian, the company also bottles and markets specialties like the local Granville Island craft beer, a West Coast IPA.

On the other, an integral part of the group strategy is to constantly add more beverages other than beer to its product range. This development is evident in the name of the company alone: since the beginning of 2020 the full company epithet has included the words “beverage company” instead of “brewing”. The switch from ‘mere’ brewery to beverage producer is therefore official. New to the program are alcohol-free or low-alcohol products, for instance, that are manufactured in a fashion similar to beer. This includes hard seltzer from America in particular that’s now enjoying increasing popularity in Canada, too. The market significance of this product is not to be underestimated, stresses Hamel, which is why Molson Coors is currently investing around €70 million in this segment in North America in order to secure itself a notable market share. A joint venture with Hexo, a Canadian manufacturer of cannabis products, is also promising. Under the name of Truss the joint company sells beverages that contain CBD, a non-psychoactive substance found in the cannabis plant. There are also numerous other categories, such as cider, wine spritzer, spirits and mixed beverages and water flavored with hops for the Vyne brand. Even if nowhere near the full product range is processed in Chilliwack, as the plant concentrates on producing beer for western Canada, the USA and Asia and the Pacific region, the site already outputs over one million liters per week – with plenty of scope for more, states Hamel.

Maximum flexibility isn’t only expected regarding labeling and secondary packaging but also with respect to the containers themselves. “We already process a broad spectrum of bottles, cans and kegs,” Hamel explains. “In the future we want to continue to exploit all the opportunities the market presents us with and that consumers demand.” The filling equipment delivered by KHS therefore also includes a canning line. The heart of the setup is the Innofill Can DVD, a can filler that’s used here for a capacity of up to 72,000 cans per hour. It can fill containers holding from 236 to 473 milliliters, whether these be of a slim, sleek or standard format. As on the glass line the Innopas PISC pasteurizer is part of the lineup, as is an Innopack Kisters TP that packs the beverage cans onto trays. These are then sent for palletizing, where the packs are grouped with the help of Fanuc robots and stacked on shipping pallets – currently in 14 different formats for these alone.

The KHS kegging line also included in the big order for Chilliwack is just as adaptable: it can process up to 240 standard, slim or one-way kegs an hour – including palletizing – made of either aluminum or PET and filled with 15, 20, 30, 50 or 58 liters of product.

A good team
Because of the sheer size of the investment, all those involved in the project had to be able to fully rely on one another during installation and commissioning in the spring and summer of 2019. The time between the creation of the structural prerequisites and the start of commercial production, during which all systems had to be connected with one another, was extremely short and there were hardly any buffers or time to spare. “Our long-standing relations with KHS stood us in good stead here; we can depend on them managing a big project like this together with us,” emphasizes Hamel. Many lessons were learned during this time that can be referred to when needed in ongoing operation. To this end, a structured process was developed to make the expertise of KHS’ engineers accessible to the company’s own workforce in the long term. This includes the establishment of standards for a good number of performance indicators, for example, that enables Molson Coors’ mechanics to ensure ideal conditions at all times and quickly detect and remedy any deviations from these.

Sustainable equipment
“When you start a project like this, you of course want to ensure that it’s equipped with the best, most advanced technology there is,” Hamel specifies. One key aspect closely related to the future viability of the plant engineering is the issue of sustainability in the form of energy and resource efficiency and the company’s carbon footprint. Molson Coors itself takes on a pioneering role in this field by recovering the CO2 released during fermentation in the brewing process and using it to fill carbonated beverages, to name but one example. “We found it incredibly important that the new lines adhere to certain sustainability criteria defined by us. We wanted to reduce our previous energy and water consumption and at the same time considerably boost our efficiency.” The result of the cooperation also has David Hamel convinced in this regard. “The KHS lines have satisfied our stringent requirements right from the start and – what’s even more important – we’ve since been able to further improve on our consumption values and availability.”

If the results of these endeavors therefore help to protect the climate, this will benefit the immediate environment; like large parts of British Columbia, Fraser Valley is an area of breathtaking beauty where people would like to continue to hike or fish in the future, too.