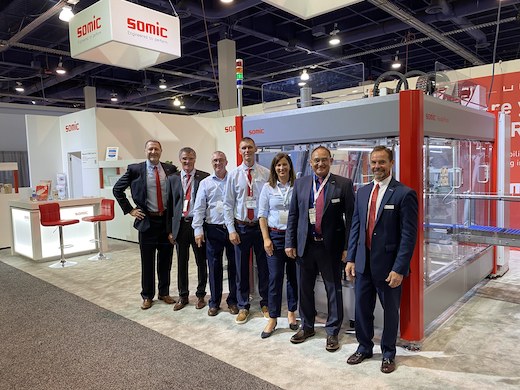 Eagan, MN. – SOMIC had high hopes for PACK Expo Las Vegas and those expectations were met. The newest version of the retail-ready ReadyPack display packaging machine was demonstrated daily and was a qualified success with booth visitors. Since the September 27-29 event, officials have been following up on an abundance of prospective leads and educating customers on the company name change to SOMIC Packaging, Inc.

“I thought it was a terrific show. It was great to see people in person again, and the Las Vegas Convention Center is a good venue that has all the capabilities to host this type of event,” remarked Peter Fox, SOMIC’s Senior Vice President of Sales.

Fox said he wasn’t surprised with the amount of attendees who visited the SOMIC booth.

“Prior to the show and based on the number of people who told me they were attending, I thought we would be busy. There was a lot of anticipation that had built up since it was the first live PACK Expo event in two years,” he said. “I noticed show attendance was lighter on the last day as usual, but we had consistent booth traffic all three days. In the end, our sales leads were 20% better than when we were here two years ago and that was a very good show for us.”

Fox attributed some of the booth buzz to the ReadyPack demonstrating GOYA Foods products. SOMIC announced on opening day that GOYA had ordered a custom built 424 T2+ case packing machine. It’s expected to be installed at their production facility in Seacaucus, New Jersey, during the first quarter of 2022.

“At the show, we ran the ReadyPack with stand-up pouches. GOYA’s new machine is a slightly larger wraparound casepacker, and they’ve designed it so it can run cartons as well,” said Fox.

“The same aspects of what led them to buying a machine is what intrigued people at PACK Expo when they saw this new version of ReadyPack. It’s an all-in-one middle-speed machine, and compact with a small footprint that requires only 70 square-feet of space. Many of the people I talked to were also impressed with the automated functions and its flexibility to accommodate future packaging options.”

Fox said that since the show ended, the company has officially changed its name from SOMIC America to SOMIC Packaging, Inc. “It was a twofold decision and involves only our name. Everything else, from sales and operations to service and parts, remains the same,” explained Fox.

“It’s for legal purposes but the bigger reason is the new name more accurately describes who we are in the packaging world. In my seven years here, our business in North America has grown dramatically and demand keeps increasing. We have customers now in a variety of markets, and our equipment has evolved so it can handle a variety of different challenges. Companies today that are dealing with a shortage of qualified workers also have a better understanding how our solutions can help with their end-of-line packaging needs.”