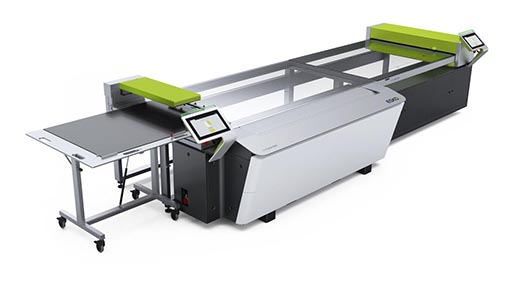 The CDI Crystal 4260 XPS can be operated with just one hour of training, with single touch operation using an intuitive screen interface and enables unattended operation. The award-winning Esko XPS Crystal technology optimally combines UV main and back exposure, using LEDs that always emit consistent UV light as opposed to traditional exposure frames, which use lightbulbs with fluctuating output.

“Today’s prepress departments face a number of challenges that make the desire to offer the combination of quality, speed and competitive pricing a key driver of investment and organizational decisions,” said Pascal Thomas, Director of Flexo Business at Esko. “The impact of Covid-19 has only compounded the demands on the packaging prepress and printing sector – be that increasing production complexity, shorter run lengths or a need for fast turnaround to meet their brand customers’ need for speed to market.

“Maintaining prepress quality and efficiency in the face of such complexity is challenging, when also needing to manage product and service quality and minimize costs to remain competitive. The answer lies in digitizing, automating and connecting the prepress and plate making process to drive down costs, increase quality and speed, and eliminate waste and errors in resources, time and materials. To that end, we are introducing the newest member of the Esko CDI family, the CDI Crystal 4260 XPS.”

The combination of the CDI Crystal flexo imager with the XPS Crystal exposing unit offers a perfect, consolidated flexo plate making workflow with the highest return on investment. “Redefined from scratch, the integration and automation of the digital imaging and LED UV exposure processes improves consistency and overall ease of use for prepress operators,” said Pascal. “This solution not only frees up valuable time but also reduces maintenance and the footprint of the flexo equipment, keeping costs to a minimum.”

The CDI Crystal 4260 XPS excels in efficiency, reducing manual steps by 50% and reducing errors by 50% to create less plate waste, alongside reducing operator time by as much as 73%.

Further driving productivity in the plate room, Esko introduced the PlateHandler, a robotic device connecting the CDI Crystal imager with the XPS Crystal exposure unit. “A prepress operator is usually required to manage multiple devices to produce a plate, which demands considerable time and attention to what is going on, and often incurs a risk of error,” explained Pascal. “Integrating the Esko PlateHandler into the system reduces the number of operator touchpoints, freeing up to 50% of their time and enabling them to attend other more value-adding tasks such as quality control, plate storage and plate mounting,” he said.

“Similarly, the new Esko PlateFeeder-S has been designed to solve a number of common issues. For example, it enables distortion-free transportation of plates, avoiding damage when they are transferred manually from storage to the CDI,” said Pascal. “The table can also be tilted to pass through doors and docked onto the CDI to ensure perfect plate positioning and digital connection to the CDI Crystal. Its cover sheet can also be removed to provide free access from all sides without static charge input.”

Integrating the PlateFeeder-S into the setup also prevents idling between plates due to the operator attending to other tasks, boosting productivity further by enabling an additional plate to be positioned for automated transportation into the CDI Crystal immediately when available. “The operator only needs to attend the machine once within each imaging cycle, to load a new plate and unload the exposed plate from the XPS Crystal,” said Pascal.

“What’s more, manual positioning is prone to errors and can be time intensive. But with the PlateFeeder-S, once docked, it becomes visible on the CDI touchscreen and integrates into the automated workflow enabling the operator to position a new plate at any time during the 15-minute imaging process,” he said. “Built-in sensors also secure accurate plate loading via the PlateHandler, avoiding plate waste and further errors. The PlateFeeder-S eliminates 100% of the plate loading idle time on the CDI Crystal XPS resulting in uninterrupted plate making, reducing system idling by up to 40% and delivering a 40% reduction in human touch points.

“With a CDI Crystal 4260 XPS with PlateHandler and PlateFeeder-S working continuously with optimum throughput and minimum operator attention, there is complete platemaking automation. The overall impact can be an increase in plate making productivity of up to 15%.”

For more on these and all the latest Esko innovations, visit www.esko.com.