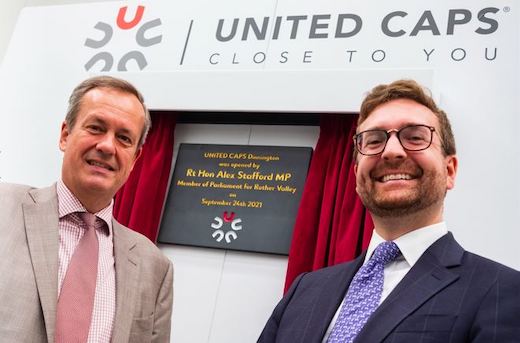 Part of the Close to You strategy, the facility initially focuses on dairy and beverage closures, including brand-new Tethered Closures

Wiltz, Luxembourg – UNITED CAPS, an international manufacturer of caps and closures, today reported it held a very successful grand opening of its new Dinnington factory in Rotherham UK, attended by the Rt Hon Alexander Stafford, MP for Rother Valley, along with many other guests.

“We established the Dinnington factory as part of our Close to You strategy, establishing production facilities in strategic regions. This strategy is designed to give us a proximity to customers that enables us to shorten delivery times, promote sustainability and focus on products that are the most relevant to each market region,” said Benoit Henckes, CEO. “Our Dinnington location has been operational since 2020, but we were unable to officially celebrate and formally open it due to pandemic restrictions. We are delighted to welcome Mr Stafford to join us for this celebration, emphasizing the importance of these types of developments for the economy, here in the North of England.”

UNITED CAPS’ Close to You strategy has driven significant investment over the past five years with UNITED CAPS increasing the number of production facilities by 30%, including the Dinnington facility and plants in Malaysia and France. During the same period, the company has grown its top-line turnover by 35%, an impressive feat. With increased production capacity, continued innovation and a runway for growth built in, UNITED CAPS is well-positioned to accelerate growth even further.

Alexander Stafford, MP for Rother Valley, said “This is a wonderful, good news story for Rother Valley. UNITED CAPS investment into our area brings high-quality, well-paid jobs helping to revitalise Dinnington. This type of investment shows that Dinnington’s fortunes are at last on the up and a vote of confidence in our future.”

During the event, guests toured the 5,000 square meter facility, which has an option to expand to 20,000 square meters as business growth demands. They saw production of beverage and dairy closures underway and were introduced to the collaborative work UNITED CAPS undertook with other industry players to develop a standard for EU-mandated Tethered Closures, a part of a sustainability strategy that was devised to keep closures intact, reducing waste and aiding in recycling. The design of the factory allows further sustainability improvements such as reduction in the use of cardboard and wooden pallets.

“This expansion to the United Kingdom is in response to increasing demand there for our products,” Henckes added. “We chose Rotherham because of its central location along

the M1 and the availability of technically skilled people in that area. We are grateful to The Department of International trade for their assistance. This is our first plant in the United Kingdom.” Henckes noted that the project represented an estimated €20 million investment including the first phase of machinery, is expected to increase group turnover by 15% in phase one, and will generate new jobs in the Rotherham area.

For more information about products and services from UNITED CAPS, please visit www.unitedcaps.com.