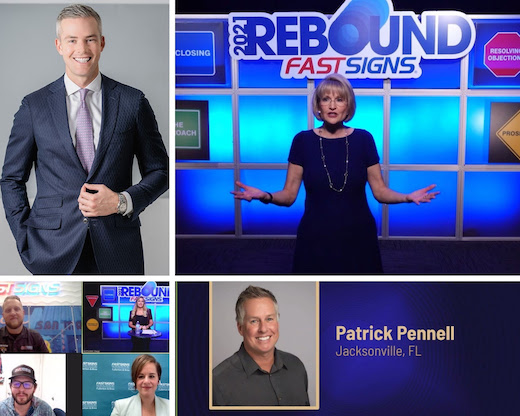 Carrollton, Tex. – FASTSIGNS International, Inc., the world’s leading sign and visual graphics franchisor with more than 750 FASTSIGNS? locations in eight countries worldwide, hosted its 11th annual Outside Sales Summit August 9-13 in a virtual setting. There were over 400 people from 5 countries in attendance.

With a Rebound theme, the 2021 Outside Sales Summit celebrated the FASTSIGNS network’s sales achievements between July 1, 2020 and June 30, 2021. At the virtual awards event on Friday, 195 Outside Sales Professionals were recognized, including 24 who received the prestigious Platinum Award for achieving over $1 million in individual sales during the 12-month period. Additionally, 15 individuals became Certified FASTSIGNS Sales Executives after completing an extensive certification program during the same period.

“We were thrilled to host our 11th annual Outside Sales Summit, held this year, as last year, in a virtual setting. This energy-packed event allowed us to provide the over 400 attendees with education and tools to continue honing their selling skills, as well as to recognize and celebrate the impressive work and achievements of FASTSIGNS Outside Sales Professionals from locations around the world,” said Catherine Monson, CEO of FASTSIGNS International, Inc. and Chair of the International Franchising Association.

One of the featured speakers included Ryan Serhant, star of Bravo’s hit series Million Dollar Listing New York and Sell it Like Serhant who delivered a highly energetic and advice-packed keynote session: How to Become the Ultimate Sales Machine.

Additional speakers from the FASTSIGNS International team covered a variety of topics including Industry Insights and Learning to Leverage Buying Trends, What Everyone Ought to Know about Selling Digital Content First, Achieving Success During a Pandemic Panel and more.

About FASTSIGNS®
FASTSIGNS International, Inc. is the leading sign and visual communications franchisor in North America, and is the worldwide franchisor of more than 750 independently owned and operated FASTSIGNS® centers in 8 countries including the United States and Puerto Rico, the United Kingdom, Canada, Chile, Grand Cayman, Malta, the Dominican Republic and Australia (where centers operate as SIGNWAVE®). FASTSIGNS locations provide comprehensive signage and graphic solutions to help companies of all sizes and across all industries attract more attention, communicate their message, promote their products, help visitors find their way and extend their branding across all of their customer touchpoints.

In 2021, Propelled Brands was formed, the corporate umbrella that includes FASTSIGNS®, SIGNWAVE® in Australia where FASTSIGNS centers operate under the SIGNWAVE brand, and NerdsToGo®, an emerging IT services franchise brand acquired in September 2020. With a focus on business-to-business franchises and the people behind those businesses, Propelled Brands will help each franchise confidently navigate forward based on their unique position, momentum and purpose.