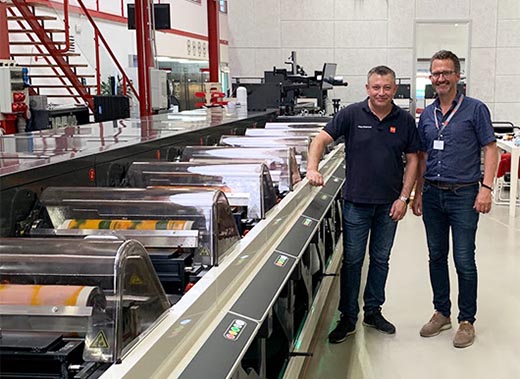 The renowned Danish dairy lidding manufacturer, Primoreels, is no stranger to Nilpeter, having acquired a 9-colour FA-17 in 2018. That press was, however, damaged in a devastating fire in September 2020, that affected much of Primoreels’ production and significantly reduced the company’s manufacturing capacity.

Through hard work and determination, not to mention the help of close partners and suppliers, the company is now back in full force and has invested in a new FA-17. During the restart, Primoreels purchased a refurbished Nilpeter FA-2500 to run production as quickly as possible after the fire.

A Remarkable Effort
“When your entire factory with production equipment, inventory, and development projects burns to the ground, it feels as if the rug is pulled out from under you,” Henrik Sahlberg, CEO, Primoreels A/S begins.

“Our contingency plan was, however, launched with full force on the day of the fire, so uncovering usable converting and printing machines in the market was initiated, spare stocks of raw materials were dispensed, and several different printing partners were immediately activated with preparation of clichés and converting tools,” he continues.

“The contingency plan was followed to the letter, which meant that all of Primoreels’ customers were kept running, and not a single one experienced production stoppage due to the fire. That is a remarkable effort, and something we can be proud of,” Henrik Sahlberg concludes.

Helping in a time of need
“Obviously, the fire was very, very unfortunate, but we are pleased that we were able to help Primoreels in a time of need, alongside our industry partners, and make sure they could sustain production during the rebuild. We’re very happy to continue the partnership, and expect great things now that Primoreels is 100% re-established,” says Jesper Jørgensen, Global Sales Manager, Nilpeter A/S.

About Primoreels A/S
Primoreels A/S offers intelligent, high-quality lidding solutions, that increase efficiency and lower total costs for manufacturers in the dairy sector and water/juice industries. Primoreels is a proud partner and supplier to well-known companies such as Arla Foods, Danone, Lactalis, and many others. Primoreels is present on 4 continents, and is currently in the process of obtaining a FSSC ISO 22000 certification, which should be concluded in November 2021. Read more on www.primoreels.com.