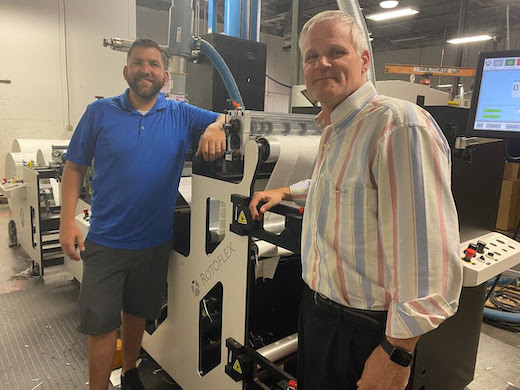 St. Louis, Mo. – Abbott Label is a unique wholesale label manufacturer with an interesting story. John Abbott, the company’s President, started the business in 2000, but his involvement with the printing industry dates to the early 1980s.

When Abbott was a teenager, just 14-years-old, he started working at his father’s company, Metro Label, during summers, weekends, and holidays. In 1985, he became a full-time employee and remained in the job until 1998, when the company was sold. A couple of years later, following his father’s footsteps, Abbott decided to open his own label manufacturing facility, named Abbott Label. Today, Abbott Label focuses on digital, flexo, and stock labels, and supports customers across the entire United States with four plants located in Texas, California, Georgia, and Illinois.

With 20% growth in the last year and about 50 new employees added to the workforce, business has never been more promising. In fact, Abbott Label has registered record-breaking sales even amid a pandemic, which sparked the need to invest in a Rotoflex DLI and two Rotoflex VSI machines to the production floor.

Abbott attributes the company’s continued success to three main factors: its team, the service they provide, and the relationships built not only with customers, but also with distributors, suppliers, and employees.

To keep providing customers with the best final product, the company acquired three Rotoflex finishing solutions in the last four months: a DLI-440 die-cutting platform and two VSI horizontal slitter and rewinder machines. The DLI was placed in the Atlanta facility along with one VSI dedicated to reinforcing the new volume created by the cutter, while the second VSI will support production in California that has grown from 1 to 1.7 million dollars a month.

These machines join a family of approximately 20 Mark Andy units throughout Abbott Label production facilities, starting with a Rotoflex finisher purchased over 25 years ago, still running strong in Chicago today. “We’re definitely, by far, a Mark Andy house,” says Abbott. “Our relationship with Mark Andy and Rotoflex was a major decision factor. I've got a 16-inch eight-color 4150 coming in, I just added two print stations. I'm looking at adding two print stations to the 2200s in my other three locations. We are adding an ESKO plate making system through Mark Andy Print Products too”, he adds. “To know that I could call Bob, Kevin or Steve Schulte and get responses right away is important. When these guys walk in the door, it's not a handshake - it's hugs, and that's how special this relationship is. And it's so special in this industry to have such great relationships and friendships,” he concludes.

About the DLI, Abbott does not spare compliments. “The finisher came in and outperformed anything we've been running. I didn't feel like we had a choice but to buy another machine because of the efficiencies we were gaining off that – the speeds, the roll chain, everything that has to do with the finisher, quality-wise and service-wise, influenced us to purchase the next two VSIs. The results coming off the DLI just swung the door wide open for us to start purchasing more.”

Speed has always been at the core of Abbott Label’s operation, and one of the biggest strengths of Rotoflex equipment. The DLI-440 has been running non-stop at 750 fpm (229 mpm) since it hit the production floor. Daniel Campbell, Production Manager, Abbott Label, explains that the company takes pride in speed. “Speed equals throughput, throughput equals money. You know, fast setups, fast tear downs and fast run speeds. That's how I was trained. That's how I train these guys. And we run these machines as fast as they go. And that's probably the favorite my favorite part.” Abbott adds “Daniel only knows how to run one speed, and that's fast.”

The DLI-440 acquired by Abbott Label is a standard model one die cut station, one perf station, one-inch capability. “We run four by twos, four by fours, four by six, three inch and one inch wide open at 750 feet a minute”, Campbell describes. The company has been evaluating adding a couple of print stations in the future, one of the options available for the DLI model.

In addition to speed, Campbell talks about how user-friendly the machine is and how little training was required to get the team up to speed. “It's foolproof, everything is very simple. Irwin from Rotoflex came out and spent a couple days with each operator we wanted to promote within the company. There was really no learning curve. The team jumped in, rolled up their sleeves, asked the right questions. And they've been running great ever since.”

According to John Abbott, the results of having the new DLI on the floor are outstanding. “We're definitely up a quarter-million dollars a month since the cutter has hit the floor. It’s hard to say how much can be attributed to the DLI itself because we’ve made changes in personnel and moved people around a bit, but it certainly made a big difference. The finisher we had there was going ‘kaput’, and we were not getting the volume that we used to.”

When it comes to plans for the future, Abbott doesn’t think like many other companies. He expresses “I know every business says you should have a one-year plan, a five-year plan, a 10-year plan. But we've just consistently grown month after month, year after year.” The latest investments made were towards incorporating new digital solutions to the pressroom with two new digital presses. “We continue to focus on service, because we believe good service brings growth and people are looking for service right now more than ever.”