Independent Carton Group Welcomes Keva Sonderen to the Board of Directors 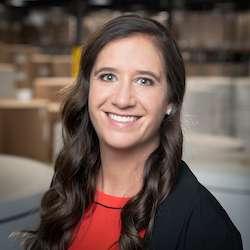 Newtown, Conn. – The Independent Carton Group (ICG), an association of 19 independently owned and operated folding carton manufacturers, is pleased to welcome Keva Sonderen of Spokane, Washington, to the ICG Board of Directors, voted in on March 4, 2021. Keva will take the place of packaging legend and founding member of the ICG, Bob Zumbiel.

To acknowledge Women’s History Month, we are proud to announce that Keva Sonderen, of Sonderen Packaging recently made history as the first woman to be elected to the Independent Carton Group Board (ICG). Keva began attending ICG meetings in 2005 with her father, Mark, when It was common to enter a room with a sea full of suits and balding heads. The actual meeting room was usually frigid because the men wore suit jackets. The ICG was founded in 1982, just one year before Keva was born. In 2020, Keva was nominated for a board seat. “It seemed like the right time for me to make this commitment. I believe in the ICG and its mission. It is imperative for the stability of the members that the ICG not only survive but thrive, and I am excited to learn from the other board members,” says Keva on her joining the board.

The next generation of ICG leadership rests in the capable hands of brother-sister team Kim Pearce, Assistant to the Executive Director, and Jay Willie, Executive Director. Their father, Andrew Willie, was a founding member of the ICG and the Executive Director for 21 years. Kim Pearce reflects, “Keva will be a wonderful liaison for the ICG member companies and will bring a fresh, energetic, and forward-thinking perspective to the organization.” Kim encouraged Keva to run for the board and has given excellent guidance and support throughout the process. Jay Willie sees how Keva has positively impacted the growth of Sonderen Packaging and goes on to say, “the Sonderen family and its team have been supporters of all aspects of the ICG since 2003. I look forward to Keva having a role in the ICG leadership and leveraging her skills and experience that have contributed to Sonderen Packaging’s continued growth and success.”

Keva was mentored over the years by two ICG women who were “daughters” taking over for their “founding fathers.” Jan Steiner paved the way for women in the folding carton industry when she took over for her father in the early 1980s and pressed for her company, Thoro Packaging, to become an early member of the ICG. Jan was an inspiration and mentor to Keva. She was famous for encouraging Keva to “Make Dust,” which refers to her philosophy for pioneering progressive technologies, imploring unique management methods, promoting women in leadership, and a nod to her love for horses. Lisa Hirsh, with Accurate Box, began attending ICG meetings in 1982 and took the helm in the 1990s for her father Charlie, an influential and initial member of the ICG. Her daughter is also in the business as the fourth generation. Lisa inspires Keva to have the courage and confidence to speak up and speak out when it matters.

As the years advance, so does the presence of women in the Independent Carton Group. Diamond Packaging, Jones Healthcare Group, Colbert Packaging, Indiana Carton Company and Wausau Container are also owned or partially-owned by women. Recently, the ICG welcomed two new members, both women-owned and operated businesses. Janah Harris and Jenise Harris-Cox of American Carton Company and Katherine Roehlke of Howell Packaging. Women hold prominent leadership roles in nearly half of all ICG member companies. Keva states, “I always look forward to getting to know new members. Each of us has a different spin on how we run our independent companies. Best practice sharing and mentoring is an integral piece of what the ICG has to offer each member. I know I can learn a lot from these ladies as we continue to “Make Dust” in the folding carton industry!

About the Independent Carton Group
The Independent Carton Group (ICG) is a growing association of 19 independently owned and operated folding carton companies from 15 states and Canada. The ICG works tirelessly to make sure that its members have access to competitive pricing on raw materials, equipment and consumables as well as offering learning and networking opportunities that help them to be successful. In 2019 ICG members collectively produced over $800 million in cartons and consumed over 250,000 tons of board. For more information on the ICG or to inquire about membership, contact the ICG office at 203-270-7578.