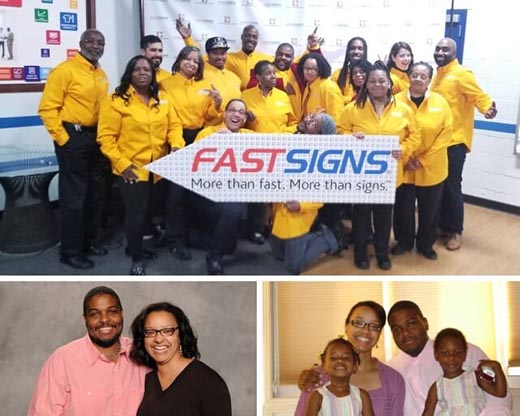 Washington, DC – Dana and Howard James, franchisees at FASTSIGNS® of Washington, DC received national recognition as the recipients of The FASTSIGNS® Award at the 2021 Virtual FASTSIGNS/Signwave International Convention.

This award is the most prestigious recognition in the franchise network of over 750 locations in nine countries worldwide. It is presented to the franchisees who best represent the FASTSIGNS brand in their community and in the network, as they provide exceptional customer service, mentorship, company culture and employee development.

“We are honored to be named the recipients of the FASTSIGNS Award. It's a wonderful thing to be acknowledged by your peers as someone in the community that contributes to the system as a whole and is appreciated,” said Howard James. “I enjoy giving and sharing and find that the benefits almost always come back to us. We are so thankful to be a part of the supportive FASTSIGNS network and see the growth that comes from investing in an incredible brand like FASTSIGNS.”

Howard James’ story led him to purchase a FASTSIGNS center with his wife, Dana, in 2007, after he spent 17 years at Duke Ellington School of the Arts as a theater production professor. Howard’s background also includes being an art teacher in D.C. and doing freelance graphic design as well.

The Howards have grown their highly successful FASTSIGNS center from 3 employees to a staff of 10 team members that plan and act like a larger organization. James works to delegate to his team, trusting and empowering them to do their part to grow the business. Rarely are two projects ever the same, which lends to continual creativity and problem-solving.

“Solutions are behind what we do. Whatever our clients need, we are going to figure it out,” said James.

During the pandemic, FASTSIGNS of D.C. did more repeat work due to COVID-19 projects, but that is not the norm in their center. When the pandemic affected their day-to-day business operations, they were prepared as a result of prior work.

“Luckily, we are tech geeks and have been working and growing our systems for inner office efficiency for a few years,” said Howard James. “Once we had to do more remote work away from the office, we realized those same systems allowed us to do that seamlessly. Our team did their best to come together to make sure every client was still taken care of and their fellow staff members were backed up if something needed a little more attention. I am very proud of my team’s efforts over the past year.”

Howard James believes the key to happy clients is a strong team, and FASTSIGNS is truly a team sport. He attributes his high level of success to the great employees he has brought on. He knows you must find, train and keep a great team, because they are the key to growth. He also coaches his team to focus on solutions and not products, and this results in stronger relationships with his customers who count on them for advice and guidance. He routinely engages with the network and looks for ways to improve his operation, serve his clients and encourages his team to do the same.

“Without the support of my wife, Dana, and my kids, the time and energy I spend building our business would not be possible. I am deeply thankful for their support,” said James.

Howard James is always willing to talk to franchise candidates, and he has served as a mentor for many new franchisees. FASTSIGNS of Washington, D.C. has received numerous honors, awards and recognition for excellent performance over many years. FASTSIGNS of DC is also a Black Enterprise Magazine Franchise Company of the Year Recipient.

A leader who never stops learning, Howard James has been in and completed a number of business development programs and has graduated from Goldman Sachs 10KSB, Inner City Capital Connections, SBA Emerging Leaders, Clark Construction Strategic Partnership Program and the Suntrust Small Business Development Program. He is currently enrolled in the WACIF / AmeriHealth Small Business Development Program as well as the ELEVATE program, a partnership between GW SB, CNHED, (Cohort 1).

In addition to receiving the FASTSIGNS Award, Howard James was recognized this year for his continued service on the Franchise Advisory Council. The members of the Franchise Advisory Council (FAC) represent all FASTSIGNS franchisees in the United States, Canada and the United Kingdom, and they provide strategic direction on services and programs, as well as advice and guidance that benefit the entire FASTSIGNS network.

“Howard and Dana James are a wonderful asset to our brand; they represent the FASTSIGNS brand with passion. They are deeply committed to FASTSIGNS, setting an excellent example in the FASTSIGNS network in all areas: from building a successful team, to solving visual communication challenges for customers daily, to providing leadership within the FASTSIGNS network,” said Catherine Monson, CEO at FASTSIGNS International and Chair of the IFA. “As dedicated franchise owners, they deserve the ultimate in recognition. They represent our brand with excellence and enthusiasm, and they are fully committed to helping other franchisees do the same.”