Based in Saint-Denis-sur-Sarthon, Normandy, SDPS is a leading supplier of high quality wide format print to the French POP and POS market. The company installed its first Onset X2 in 2016 and followed that with a second installation the following year. Three years on, in the summer of 2020, they decided to take the opportunity to upgrade to the Onset X2 HS, which was launched by Fujifilm and Inca Digital in 2019.

"We were very happy with the two X2 machines," says Richard Charrier, Technical Director at SDPS. "They are highly productive - the best on the market - but we saw an opportunity to boost our production speeds even further if we invested in an HS model."

The Onset X2 HS was installed in August, with the accompanying robotic arm system having to follow later due to COVID restrictions. Neither Charrier, nor company CEO Regis Broussin have been disappointed. "Job set-up times are much faster now," says Broussin. "We're saving five to ten minutes in set-up time with every job, and with anywhere from two to ten jobs in a typical shift, that time saving quickly adds up."

Nor is it just with the job set-up that time savings are being made. "The printing speed is faster as well," Broussin adds. "The heads adjust more quickly and the loading and unloading is much smoother. All together we're saving one-and-a-half to two hours of production time every shift. What that has meant is that we've moved from a pattern of three eight hour shifts per day to three seven hour shifts per day. We've also now been able to start closing the factory on Saturday mornings and giving everyone a welcome break. And we've been able to do all of that while maintaining the same levels of production as before."

Charrier notes that the quality the Onset range is known for is still very much there. "The extra speed hasn't affected the quality at all," he comments. "It's still every bit as good and our customers are delighted with it."

Like all print businesses in Europe, SDPS faced significant challenges in 2020 as a result of the pandemic. "A lot of our usual work dropped off during the first lockdown in the spring," says Broussin. "It picked up rapidly in July and August - we were much busier then than we normally would be - but overall it's certainly been a very tough year.

"Looking ahead, the print production market is very competitive and I expect to see a bit of a price war next year among us and our competitors. Having an exceptionally reliable, high quality and high productivity machine like the Onset is certainly an advantage for us in that scenario."

Jerome Delplanque, Commercial Director, Wide Format, Fujifilm Graphic Systems France says: "SDPS has been a valued customer of Fujifilm's for a number of years now. Having been with them for so many new steps on their journey, we're delighted to have been able to give their production yet another boost with our latest high speed Onset model. In what has been a very tough year for all of us, SDPS has performed admirably well and we're proud to be working with them." 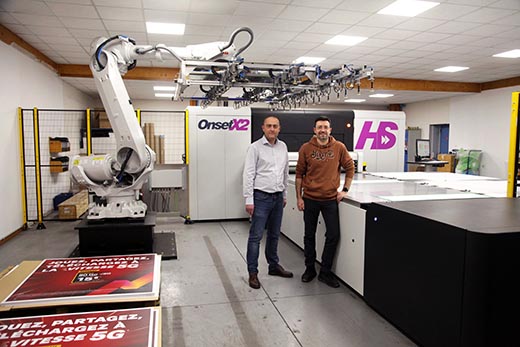