Built in 1999, 151 West 42nd Street (formerly 4 Times Square) is the nation’s first “green skyscraper.” It is owned and operated by The Durst Organization, one of the oldest family-run commercial and residential real estate companies in New York City.

The Broadway Plaza Digital measures 19’8″ high by 85′ wide and employs a 10 mm pixel pitch. The display includes an oblique return, essentially a gap on the left end of the display that angles away from the main part of the screen, designed to accommodate future signage. This feature also creates added exposure facing uptown to onlookers in Times Square above 43rd Street.

Branded Cities is managing advertising and digital marketing campaigns on the new spectacular for The Durst Organization.

Conceptual design, EDC permitting coordination, and documentation of the display were led for The Durst Organization by Sensory Interactive, who also worked with the client to develop the overall vision for the project. Sensory Interactive then represented the owner throughout the procurement and construction process, ensuring that the project addressed future tenant needs, came in under budget, and was completed before the holiday season despite challenges related to COVID and the difficult logistics of working in the Times Square environment.

As part of the multi-faceted construction project, SNA Displays and Sensory Interactive project management teams coordinated the retrofitting of static signage. While most of the existing structure was retained for the new digital signage, some of the older steel was removed. SNA Displays also managed the installation of new steel and catwalks to support both the static and digital signage as well as new lighting fixtures.

“This project stands out because of the massive signage elements in both static and digital combined into one structure,” said John Pisciotta, senior project manager for SNA Displays. “As one of the country’s premier manufacturers of LED spectaculars, we don’t typically deal with static signage except to replace them entirely with digital ones. In the end, though, I think the new static sign marries well with the LED display, allowing H&M and future tenants the option to blend classic and modern media.”

SNA Displays used a continuous strip of LED lighting to illuminate the static signage, according to Pisciotta.

Finally, to accommodate a potential restaurant tenant, the design and engineering team considered the impact of a kitchen exhaust duct running through the catwalk system along Broadway, the only available exit for the duct. This meant that no structural or electrical components could be installed in the potential pathway.

Currently, both the static and digital displays feature H&M advertising. 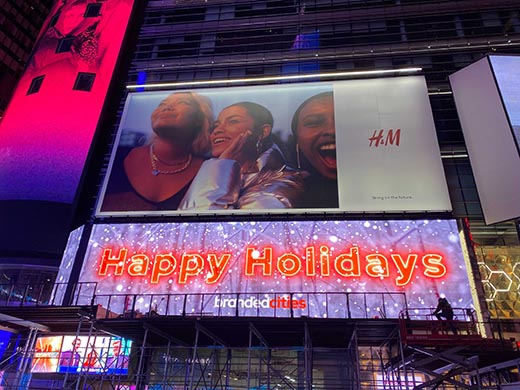