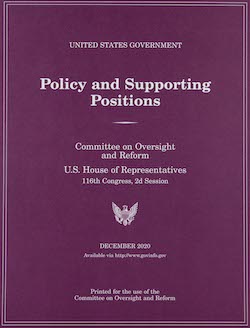 Washington, D.C. – The U.S. Government Publishing Office (GPO) has made the United States Policy and Supporting Positions, or “The Plum Book”, available in print and online. The publication lists more than 9,000 Federal civil service leadership and support positions in the executive and legislative branches that may be subject to noncompetitive appointment. On GPO’s govinfo, users can view the publication on smartphones, tablets, laptops, and personal computers, and can search the publication by agency, position title, location, appointment type, pay plan and level, tenure and term expiration, and vacancy. The data for The Plum Book was composed in XPub, GPO’s new digital technology for XML-based publishing.

Print copies can be ordered at https://bookstore.gpo.gov/products/united-states-government-policy-and-supporting-positions-plum-book-2020

The Plum Book is published by the House Oversight and Reform Committee and the Senate Committee on Homeland Security and Governmental Affairs alternately after each Presidential election. The Plum Book is used to identify Presidential appointed and other positions within the Federal Government. The list originated in 1952 during the Eisenhower administration. For 22 years prior, the Democrats controlled the Federal Government. When President Eisenhower took office, the Republican Party requested a list of government positions that President Eisenhower could fill. The next edition of The Plum Book appeared in 1960 and has since been published every four years, just after the Presidential election.