Tokyo, Japan & Brussels, Belgium – Asahi Photoproducts, a pioneer in flexographic photopolymer plate development, today reported it extended its relationship with Esko through an agreement to install Esko plate imaging solutions in the Asahi Tech Center in Suzhou, near Shanghai. The agreement, which was entered into during All-in-Print China, will result in the installation of an Esko CDI Spark 4260 and an XPS Crystal 5080 in the Center.

“Asahi Photoproducts has worked together with Esko in China for a decade and this agreement takes the relationship to a new level in our ability to serve the rapidly evolving flexographic market in China,” said Yuji Suzuki, Asahi’s Senior Manager of Customer Technical Service.

Suzuki points out that high-end print quality is increasingly required in China, and many repro houses in the region still have difficulty making plates that deliver the best print quality. “One thing we will be doing in our Tech Center with the new equipment,” he says, “is creating test plates for potential customers so they can see for themselves that we can deliver the quality they need. We will also use the facility to do training and seminars for customers and potential customers.”

Esko will also have access to the Tech Center, offering the possibility to Asahi’s customers to learn more about how the Esko plate imaging system functions with Asahi’s AWPTM CleanPrint water-washable plates. “We are pleased to continue to grow our partnership with Asahi, especially in the highly competitive Chinese market,” said Rocky Zhou, General Manager for Esko in Shanghai. “The solutions being installed at the Asahi Tech Center will benefit both of our businesses as we work to continue to bring the latest state-of-the-art flexographic solutions to this region”.

CleanPrint flexographic plates from Asahi Photoproducts have been specifically engineered by Asahi’s chemical engineers to transfer all remaining ink to the printed substrate, reducing makeready time and press cleaning stops as compared to other platemaking systems while delivering exceptional quality. AWPTM CleanPrint water-washable plates emit fewer VOCs in prepress as they don´t use solvents in the washout process. Studies show that CleanPrint water-washable plates have the smallest cradle-to-grave carbon footprint when compared to solvent or thermal solutions. Less makeready waste and waste due to plate cleaning press stops brings the process even more in balance with the environment. And more efficient throughput means less energy consumption.

“In the Tech Center implementation,” Suzuki added, “we will also be working with a third party solution that completely eliminates wastewater from plate processing, separating out solids in a cake form that can be easily disposed of or incinerated, and capturing potable water. This will add even further to accelerate our AWPTM promotion into the Chines market.

For more information about flexographic solutions from Asahi Photoproducts that are in harmony with the environment, visit www.asahi-photoproducts.com. 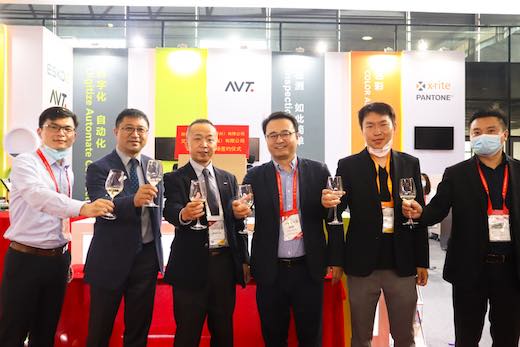 During All-in-Print China, Asahi Photoproducts and Esko celebrated the latest advance in their long-term partnership, signing an agreement to place Esko equipment in Asahi’s Shanghai