Here’s to a Good Partnership: MKE Brewing Company and KHS

People like Jim McCabe are helping to ensure that Milwaukee is also associated with handcrafted beers. His model for success is to provide quality products with a local character made by Milwaukee Brewing Company at a traditional location.

Milwaukee, the beer capital of the world on Lake Michigan, has a checkered history. In the second half of the 19th century the small town’s population positively exploded from just 20,000 to almost 300,000. Around 70% of its new inhabitants were German immigrants and their families, upon whom Milwaukee, out in the Midwest of the United States of America, exerted a special magnetism. Many of them quickly became rich and famous in their new home, among them Frederick Pabst, Frederick Miller and Joseph Schlitz who set up the three largest breweries in the world in the area.

Even today, hardly anywhere else in the USA is as much beer brewed as here. However, the beer culture in Milwaukee has rapidly changed in the last 30 years, with the city also heralded as the cradle of the craft beer movement. This is now entirely devoted to artisan brewing, placing individual taste and high quality above sheer quantity. One of the pioneers thereof is Jim McCabe who, like many craft brewers, more or less came to brewing by chance. He first became passionate about the craft while studying electrical engineering. “Milwaukee was a beer town, heart and soul – you just couldn’t avoid the subject,” he remembers. “Even back then there was a certain trend for brewing on a small scale and you could just feel that the city was ready for more variety. There were beer festivals on all the time and I took part in countless brewery tours. As an engineer I was ultimately also fascinated by the actual brewing process.”

From management consultant to craft brewer
For several years McCabe’s career took him to Oregon where he worked for a large consultancy company. There, on the west coast, microbrewing was much more advanced than in Wisconsin and McCabe was amazed by the diversity of flavors and beer styles on offer. He also had contact with the brewing industry in a professional capacity, although more with the sector’s big names and their suppliers, all of whom he advised. During this period he formed a close bond with the North American branch of KHS which is based in Waukesha just outside Milwaukee; the engineering company is one of the businesses he visited in his job as consultant. Over the next few years McCabe could at first only dream of using KHS high-tech himself, however, as, in his free time, he began experimenting with making beer in his basement at home. He soon realized that brewing was going to be more for him than just a simple pastime. He began to think about how he could make his hobby his profession and finally, in 1997 after several years of planning, he opened his own brewhouse, Milwaukee Ale House. “It was good to put my feelers out first,” he stresses. “At the time there was no place in the retail trade for individually brewed beer – neither on the shelves nor in the minds of the retailers. Also, in the 1990s there was a lot of bad craft beer being made initially, prompting many consumers to stick with their standard brand.” In time and thanks to the growing number of imports people slowly developed a taste for it, however. This gave craft brewers a real boost at the beginning of the 2000s and the opportunity to work on the quality of their products.

Right from the start McCabe and his team attached great importance to producing the best brewing results. As an engineer he left nothing to chance. “We’ve always had a laboratory where we can perform our experiments and play with various ingredients and flavors at a professional level. This was very unusual for a company ofour modest size. And we documented everything in order to ensure a constant quality.” Another aspect from the very beginning was the technology. Equipment which couldn’t be afforded new was simply procured second hand – yet this always had to meet the engineer’s high standards.

Within a few years McCabe achieved his goal: his brewpub was the talk of the town and lauded in Milwaukee as THE place to enjoy good beer. Demand grew and more and more customers wanted to also drink his products outside Milwaukee Ale House. The company thus began trialing barrels in the hospitality trade and cooperating with external partners. McCabe wasn’t very pleased with the outcome, however, yet didn’t want to compromise in any way on shelf life and quality. It soon became clear that things couldn't continue on such a small footing; the next stage in the company’s development was thus triggered in 2007 with the construction of a full-scale brewery, Milwaukee Brewing Company or MKE.

Miracle growth
MKE beers are refreshingly uncomplicated on the one hand yet convincingly bold in their use of out-of-the-ordinary ingredients on the other. Besides the flagship brew, an amber ale with a rich, malty taste and hoppy finish, there are a number of IPAs, some of which are lightly infused with Asian teas. The portfolio also includes an especially creamy nitro stout and ales which have a slight hint of whiskey from being aged in old bourbon barrels, plus a range of seasonal specialties brewed throughout the year.

After ten years of constant growth the new brewery has also become far too small. In 2017 the company had the unique opportunity to expand into a huge, old warehouse sited on the premises of the former Pabst Brewery. With the help of an investor Milwaukee Brewing Company acquired the property, enabling it to quadruple its previous capacity in one fell swoop to a maximum 85,000 hectoliters per year. In addition to the 4,500-square-meter brewery the hall also accommodates pubs, event venues, a huge rooftop terrace and almost 6,000 square meters of offices.

McCabe himself invested about €6.5 million – also in the technology. Three machines for the filling of bottles, cans and barrels were to be procured and when choosing a supplier the company owner remembered KHS. After all, years ago he’d often seen the German system supplier’s pioneering technology in action and long been in contact with Bob Pease, product group director at KHS USA. “Of course it’s handy for us to install our machines right on our doorstep, as it were, and to see how they prove themselves in practice at close quarters,” Pease smiles. “This makes it easy to exchange ideas and information. Even if the technology seems to be more or less the same, it’s the personal contact which makes all the difference.” McCabe also confirms the close relationship between the two companies. “It’d feel strange if we two didn’t speak to one another at least once a month.” For him, the prime factor in deciding to invest in KHS machinery was after sales. “Compared to the competition, the service provided by KHS is far superior the world over. Here, we sense there’s a much higher level of involvement and we have exactly the response time we need.”

Transparent brewery
In the summer of 2018 MKE Brewing moved into its new facilities. In doing so the company not only freed itself from the narrow confines of its former premises – which to date had forced visitors on the popular tours of the brewery to literally squeeze themselves past stacked barrels, sacks of malt and pallets piled high with cans. “At our old site we first had to clear a safe path through the brewery for our visitors every Friday afternoon. That was pretty crazy,” laughs McCabe. The spacious, light, transparent building on Ninth Street clearly indicates that this is a place where beer is made yet it also extends a warm invitation to the public at large. Guests to the pub have an in-depth view of MKE’s manufacturing and filling processes. The brewhouse and filling technology can be observed from the taproom through glass panes stretching from floor to ceiling – even while production is running. The three new KHS machines – an Innofill Glass Micro DPG bottle filler, an Innofill Can C can filler and an Innokeg CombiKeg for racking beer barrels– are thus practically ensconced in their very own showroom. “Using sophisticated technology is an important distinguishing feature for us, especially when it comes to contract filling,” the brewer explains. “Not many companies of our size can afford machines of this caliber. However, we find this absolutely essential if we are to ensure that our beer reaches the consumer in the quality it was made in.”

Jim McCabe came one big step closer to his dream of running his new setup at full capacity in the medium term at the end of 2019 when he began contract filling for the SUP brand based in Boston. This is the first organic product in a new and extremely successful new category of beverage in the USA called hard seltzer. With a contract of delivery for 60,000 hectoliters a year MKE is ‘sold out’ until further notice – and that’s a good thing, believes McCabe. “For us, the special spirit of this place is both a form of motivation and a warning,” he sums up. “On the one hand, the name Pabst is of course associated with quality and tradition. This is a great incentive for us. On the other, we also feel a sense of responsibility – and are always aware of the possible risk of failure.” In view of Milwaukee Brewing Company’s exemplary story of success to date, however, this seems highly unlikely. 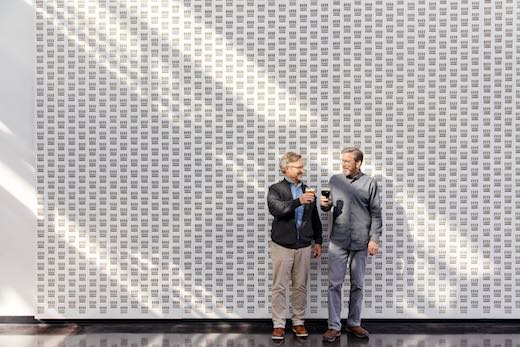 Jim McCabe (left), owner of MKE, and Bob Pease, product group director for KHS USA, have known one another for years.