CMYUK, Shrewsbury – Abbi Signs likes to keep it in the family. This design and print business based in Widnes, Cheshire, was founded by John Goodfellow forty years ago, only these days he’s been joined by his son Steve, who is now Production Director and grandson Chris, Workshop Manager. Back in the day, there was a business partner subsequently bought out by John, after whom the company was renamed Abbi Signs & Designs after Steve’s youngest daughter.

John and Steve looked at a number of flatbed options but in the end stayed with the Mimaki family, a manufacturer it has worked with for nearly a decade.

“We looked at other printers and second user machines, but we decided to go for a new Mimaki, it was just a no-brainer,” says John.

“One of our customers first recommended Mimaki to us due to his experience. These printers are very good quality and very reliable, and that’s why in the end we went for a flatbed in the same brand,” says Chris.

New horizons
The Mimaki JFX200-2513EX expands the potential for professional sign and graphics companies. It has a choice of inks including white, offering greater creative opportunities and the ability to pint onto a wide range of substrates.

“It will allow us to carry out work we haven’t done before. It’s going to open up markets that we couldn’t even have applied for,” says John.

The CMYUK element
The relationship between the company and CMYUK began at Sign and Digital nearly four years ago, when Steve visited the CMYUK stand and met Sue Hayward, Sales Director. “I’ve always had a good relationship with Sue,” says Steve. “She’s been great as she’s kept in touch with us over a long period of time – it’s been a slow backburner. CMYUK has offered us deals over that period but it hadn’t been the right time for us to buy until now.”

Instant impact
The company initially bought the UV flatbed to improve productivity around existing work. It had been using its Mimaki roll-to-roll machine to print vinyl, then waiting for it to de-gas, followed by laminating onto Foamex or Diabond.

“We bought the Mimaki JFX200-2513EX to improve production times on our output. We’re now probably 50% faster and 30% more profitable, and that’s just with our existing work,” says Steve.

The company is looking to develop into new markets – and is exploring the idea of printing on-line customised products. Service like outputting boards for Estate Agents will be much easier and cost effective, allowing the company to properly pursue these opportunities in volume rather than one-off jobs.

CMYUK customer service
The flatbed was installed at the beginning of September, after the company completely renovated its premises in order to accommodate the 2.5m x 1.3m bed, which required additional working space. This was followed by three-days of COVID-safe on-site training.

“It was really fantastic. Obviously we are very familiar with the software, we just needed to see the updates, but the engineer who came in over 3 days Geoff Powell, was really brilliant. We’ve not had any initial issues – it has all flowed very seamlessly,” says Steve.

Lockdown and beyond
The company remained open all through Lockdown – operating a skeleton staff as it services a number of customers in the chemicals industry printing hazchem labels and the like, as well as the transportation sector, both of which weren’t adversely affected.

“We didn’t have the flatbed in at that point and many of our customers were just working normally, we did some floor graphics for our existing customers but didn’t have a massive influx of PPE. We were serving customers that had been loyal to us, they were our priority during that period,” says Steve.

As far as the future is concerned, if new client work demands additional print and finishing equipment then Abbi Signs will look to invest, but for now, it will carry on doing what it’s been doing, but with an eye to new opportunities. 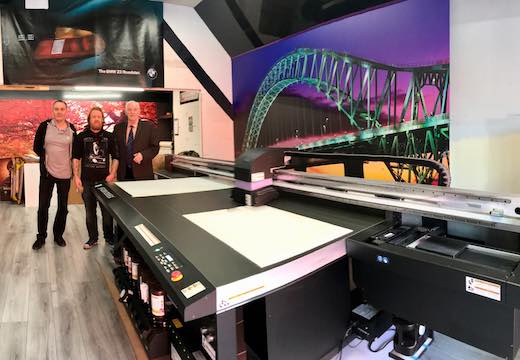