TEAM Concept Printing and Thermography Inc., located in Carol Stream, IL, is known for partnering with various different agencies, designers, and print brokers, having the mindset that their TEAM is an extension of their customers’ Team. They offer offset, digital, large format and thermography printing capabilities, with the most recent expansion being to bring the finishing in-house, which had previously been out-sourced.

TEAM Concept’s search for a rotary die cutting systems began at the PRINT ’19 tradeshow in Chicago, IL. One of the main goals of bringing a machine system like this in-house was to ensure it was as versatile as possible, and could accommodate as wide a range of finished products as possible. Products such as stickers and decals, pocket folders, specialized brochures, folding cartons and much more were all being targeted. The Insignia was a viable option for die-cutting embellished print from TEAM Concept Printing's exclusive LUX FX finishing and service line of foils, varnishes, and advanced other unique treatments.

"We decided to go with Rollem because of their industry reputation and their hands on service delivery. Throughout the install process we have been very impressed with their team's level of collaboration and training style. We could not ask for more. From a technical stand point we decided on the INSIGNIA 7 because of the size of projects it can handle and the complexity of work we can die-cut with it. It seems like it can handle any type of project and any size of project. Our team already loves the machine. Thanks Rollem." – Vince Manini, Partner/Vice President, TEAM Concept

The versatility offered with the Insignia7H die cutting system made it a great match. This machine utilizes a pair of magnetic cylinders which houses a pair or “male/female” set of die cutting tools when producing items such as folding cartons or pocket folders. This also opens the door for embossed or debossed products, as well as running product directly in-line to folding/gluing systems for complete inline finishing of high volume work.

Alternately, when TEAM looks to convert flat products such as shaped cards, brochures, sticker sheets and more, the Insignia7H system can accept a blanket as the cutting surface for the lower cylinder and require (only) an upper cutting tool to save cost on certain jobs with the use of only one die.

The ease of use, mechanical functionality, reliability and robust construction design were all contributing factors to bringing the Insignia system in-house. Further, the proximity to Rollem’s Midwest team in Schaumburg, IL and the fact this equipment is manufactured in the United States were deciding factors. 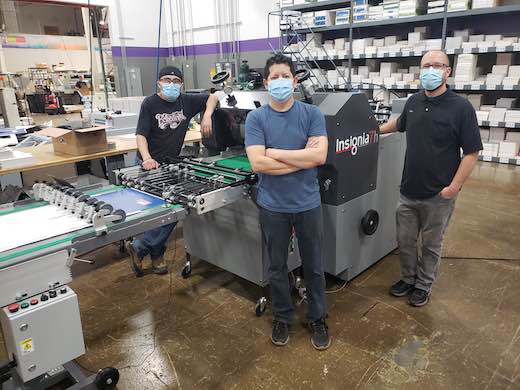