CMYUK, Shrewsbury – Selectequip has purchased a Mimaki UCJV150-160UV roll-to-roll print and cut printer, and a Mimaki JFX200-2513 EX flatbed printer from CMYUK. The decision to buy this powerful printer duo was in response to the dramatic upsurge in demand for COVID-related products and signage.

“In week one of Lockdown I was making my furlough lists but by week three I was looking for more staff,” says Selectequip’s Managing Director, Henry Spence.

The installation follows on from the company’s investment in a Mimaki JFX 2531 and a Kongsberg X24 digital cutting table purchased from CMYUK in 2018. “These took us to a totally different realm of what kind of signage we could produce and what our capabilities were,” says Henry.

Railway infrastructure
Selectequip was founded in 1989 and its core business has been servicing rail infrastructure, specialist engineering products and a wide range of innovative signage solutions. A UK Train Operating Company (TOC) is a major client, and Selectequip is responsible for producing signage for close to 250 of its stations.

“We survey, design, manufacture and install. We deliver the whole package,” says Henry.

Sustained Mimaki investment
The company’s proactive early response to COVID-19 has undoubtedly helped to deliver this year’s forecasted turnover in just five months. However, what has really enabled the company to become agile and step-up to robust demand has been its investment in Mimaki print technology and Kongsberg finishing equipment.

In 2013, Henry had purchased two Mimaki -JV300 printers and a laminator to expand the company’s signage offering, installing them in new premises in Wakefield. However, he realised that in order to take the company to the next level further investment was required.

He turned to industry expert Sue Hayward, Senior Digital Sales Consultant at CMYUK. “Whenever I'm in the market for printers or have to do anything to do with printing I go to Sue. She is really nice, trustworthy and very knowledgeable,” says Henry.

At the end of 2017, Selectequip installed a Mimaki JFX200-2513, a high-performance LED UV flatbed and an ESKO Kongsberg X24 digital cutting table.

“This took us in a totally different realm of what kind of signage we could produce and what our capabilities were,” says Henry.

The Mimaki JFX200-2513 ensured the company’s continued versatility, giving it the opportunity to print to a wide variety of substrates as well as outputting direct to board. The ESKO helped to rocket productivity to new levels with jobs that had once taken several hours to finish, being completed in under an hour.

“This allowed us to get a much better offering to our customers in terms of savings,” says Henry. “Once an order came in we were so much quicker in producing jobs, packing and sending them out again.”

In the three and half years since the installation of the Mimaki JFX200-2513 and the ESKO X24, Selectequip has doubled its turnover going from £3.9m at the end of 2016 to £11m by the end of this year.

“The ability for us to do more with the machinery that we purchased has certainly been key to the reason why we've been able to do so well,” says Henry.

COVID response
It was the upsurge in demand at the beginning of Lockdown that pushed the company to purchase a new Mimaki UCJV150-160 roll-fed, UV, print and cut machine, and the Mimaki JFX200-2513 EX, the faster, upgraded version of its existing flatbed.

At the start of lockdown, Selectequip was quick out of the traps producing a 16-page brochure of COVID safety products including PPE items. However, as a supplier to the railways, it had historically always offered a wide range of PPE solutions but quickly developed a new range of sanitising stations – magnetic, freestanding, and wall-mounted – printed on the JFX200-2513 flatbed and finished on the ESKO 24. The demand was immense.

“We had three shifts on at the time and we knew that the Mimaki JFX200-2513 was at full capacity and the work was mounting up, the Kongsberg is really quick but we were experiencing bottlenecks with the printing. We just couldn’t cope with the amount of business we were bringing in,” says Henry.

“With help from the team at CMYUK, We have been able to completely re-engineer our production workflow. The business has become very efficient and because of recent demand, we’ve multiplied our output somewhere in the region of about eight times now. It has been an incredibly busy time,” he says.

Strong for the future
Selectequip has always had a reputation for innovation. It has never supplied off-the-shelf products and works with its clients such as Network Rail, the Ministry of Defence and the Marriott Hotel Group to create unique signage solutions.

With a staff of 37 based across two sites – Litchfield for sales, consumables, engineering, and innovations, plus an impressive demonstration suite and production site in Wakefield, Henry is confident about the future.

“We’re in a strong position,” he says, “because no matter what comes in across our desks in terms of an opportunity, we can handle it. Our output capabilities are far greater than we’d ever thought they’d be.”

At a glance:
Selectequip
Founded in 1989
Offices in Litchfield and Wakefield
37 staff
2018 refurbishment of Wakefield site to include a new production showroom
Turnover of £11m expected at the end of this year

Henry Spence has worked for the company for 25 years for the first 13 as an employee, but in 2008 along with a colleague underwent his first MBO, only to repeat the process eight years later to become sole owner. 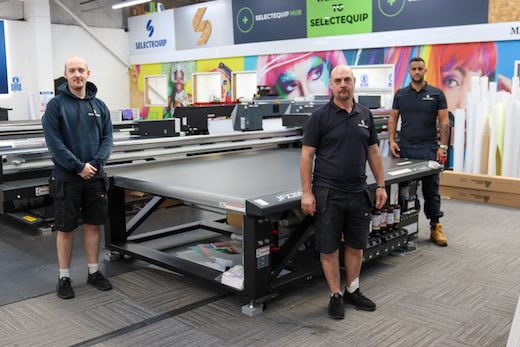