Shrewsbury – Like many print service providers, Quarmby Colour strode into 2020 confidently with a full order book, only to watch in disbelief a few weeks later as its event and photographic exhibition display work dried up overnight.

Quarmby has a reputation for producing high-end display work for the heritage sector, a market it has serviced from its inception in 1994 as a high-end photographic lab. While the company is still heavily involved with this area, it is well known for its retail work, particularly for food graphics, which accounted for almost half its output prior to Lockdown. Since this time, its association with food retail has surged.

“As soon as we realised what was going to happen, we became very proactive and got straight on to all our contacts, particularly those in the supermarket world,” says Damian Quarmby joint Managing Director, who runs the company with his brother Darren, after their founder father Ron, stepped back.

During Lockdown Quarmby Colour won a large rolling contract for a leading supermarket chain to produce all social distancing floor graphics and safety graphics for its entire estate to include all stores and numerous internal offices up and down the country.

In the early days of Lockdown, the company also produced a catalogue of safeguarding products that could be customised by brands and businesses that was well received. It also produced safeguarding signage and floor graphics for the NHS and corporates.

While it furloughed some staff early on, within a few weeks all personnel were back at work along with three new staff members.

“We focused in on the floor graphics side of things,” says Damian. “We were running our machines 24 hours a day, seven days, week after week after week,” he says.

CMYUK reliable materials supply
Throughout the years Quarmby Colour has enjoyed a long-standing relationship with CMYUK. “We’ve always seen them as our buddies in the industry. They've recommended products, given us advice on the right materials, and they're very competitive. However, through the Lockdown period the relationship became an imperative.

“CMYUK saved our bacon, that’s the truth of it,” says Damian. “If they hadn’t had the foresight to order in the amounts that they did, we wouldn’t have been able to go ahead and do what we did.”

CMYUK supplied Quarmby with the lion’s share of material at this time, and with the volume of work being printed, the stakes were high in terms of consistent media supply.

In the capable hands of Damien Clarke, Sales Director for CMYUK’s consumables business, Quarmby Colour was able to meet all clients’ expectations and the most stringent of deadlines.

“It’s easy to talk about it after the event but at the time it was extremely stressful. Damien (Clarke) came up trumps and he told me not to worry. He reassured me that he would make sure we had material when we needed it. CMYUK had deliveries coming into the country on a regular basis, and they even speeded some up from Holland bringing them in quicker for us,” says Damian.

Quarmby’s floor graphic material of choice was CMYUK’s UTACK HEXOFLOOR Vinyl. This is a self-adhesive vinyl with a clear removable adhesive and an R10 anti-slip rating. Fast and easy to apply, it doesn’t require any lamination and lasts for up to six-months of indoor use. In addition to floors, it can be applied to any smooth surfaces.

Quarmby printed over 1000 rolls of floor graphics during this period, which benefitted the company greatly thanks to the Consumables Supported Asset Finance agreement or (CSAF) it has with CMYUK.

CSAF is a loyalty mechanism whereby switching some or all of your roll-to-roll consumable spend to CMYUK reduces your monthly finance agreement payments. So, the more a customer spends on materials, the greater the savings on capital equipment costs.

The house of VUTEk
From the word go Quarmby Colour has always invested in EFI VUTEk equipment. Last year, it was the first print company in the UK to install the EFI VUTEk h5, an eight-colour plus white, LED hybrid printer. This printer raises the bar on productivity, printing at ultra-fast speeds giving Quarmby the confidence to deliver on the most challenging of jobs with the tightest of deadlines. It is set to replace its EFI VUTEk GS3250 LX Pro with UltraDrop technology with an h5 model that includes a varnish option. The company is also adding to digital cutting capabilities.

The future
With the technology in place to deliver any job irrespective of challenging circumstances, Quarmby has spent time and money ensuring that the human side of the business can continue to work safely in the light of a second wave. New offices and working areas have been created, and staff have been reorganised into segregated areas.

“We've got plans in place so that we can shut down parts of the building and quarantine, whilst keeping other work areas operational. We’re committed to a major supermarket rollout programme now with a demanding schedule. We’re conscious that we need to do all we can to ensure the safety of our staff and protect the business, we don’t want to fall foul,” says Damian.

All directors have undergone up to date training on all the technology, ready to step in the event of operators becoming unwell.

But while the museum sector has been quiet, there has been some activity. The company has created graphics for three clients, refreshing displays while the museums have been closed. However, another five museums including the new Doncaster Cultural and Learning, London Science Museum (Brass, Steel and Fire Travelling Exhibition) The Queens Royal Hussar at Warwick Castle are still on track to install new displays by the end of the year.

There’s also an increasing amount of Ministry of Defence work that Quarmby picked up at the start of the year, which is increasing in volume.

“As far as the future is concerned, Quarmby is looking good,” says Damian.

“We are positive and although the display side of the business has been affected, it will come back. Some people are saying that when it does come back, it might have to be done differently, that the museums will go online but I don’t believe that for a minute. The museum experience is more than just looking at graphics – it’s about meeting up, going to a wonderful location, and as soon as people get their liberties and freedom back, they will return.

“We've got a good chunk of work coming our way. As long as we keep operating and doing a good job, we’ll be fine.” 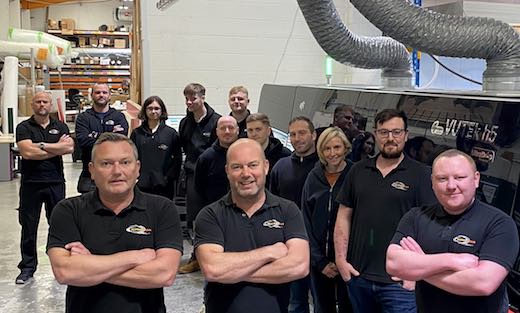