Kennesaw, Ga. – Allied Media, a small, family-owned company located in Fenton, Michigan, specializes in printing for local unions in addition to political printing and mailing. To prepare for the abundance of campaign mailings in 2020, Allied Media installed a new Stahlfolder KH 82 from Heidelberg to increase the company’s throughput and significantly shorten its turnaround times.

Unable to fold a full press sheet from its Speedmaster SM 102 with its two older, smaller Stahlfolders, Allied Media needed a more robust folder to better equip the company for its busiest time of year – campaign season. Installed in April 2019, the Stahlfolder KH 82 has enabled Allied Media to eliminate the need to outsource its larger folding jobs to external vendors – slashing both its turnaround times and costs.

According to Bindery Manager, Rob French, “This machine has sped up my process immensely, and we can get jobs to our customers much faster.” Combining higher throughput and excellent flexibility, the Stahlfolder KH 82 with stacker provides high quality folding at 12,000 sheets per hour. The KH 82 is the workhorse of the Stahlfolder line, running at high speeds and with optimum automation; the folder has shortened Allied Media’s makeready times by 80%. While the company still has its two older folders, it runs almost all of its jobs exclusively on the Stahlfolder KH 82.

“On our older Heidelberg TF folders, my set-up time for a standard job is around 30 minutes. With the built-in automation and job recall on the KH 82, I can go from job to job in as little as 5 minutes. Job changeover is as simple as pressing a button and makeready time is minimal. It’s simply an exceptional machine,” said French.

While Allied Media’s speed-to-market has increased significantly due in part to the technology on the Stahlfolder KH 82, French also credits the “phenomenal” training from Heidelberg’s SystemService team for his ability to efficiently move jobs through his bindery department. With Heidelberg’s thorough training, French said he easily learned 95% of the skills necessary to operate the KH 82 successfully – developing the remaining necessary skills based on Allied Media’s individual jobs.

A loyal Heidelberg customer, Allied Media also relies on its two Heidelberg presses, Suprasetter CtP, and Saphira Consumables to produce high quality and cost-effective work for its customers. According to French, “We pick Heidelberg because they make great equipment that requires very little maintenance. Running Heidelberg equipment just makes my job less stressful as an operator.” 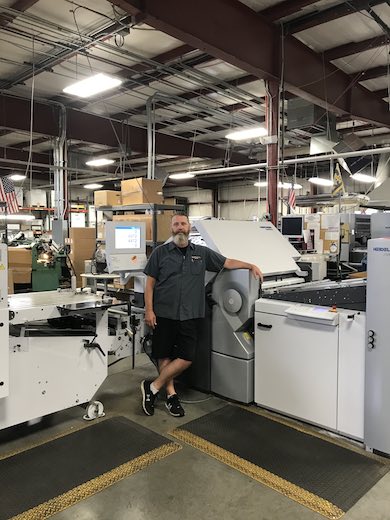