A research conducted by Fondazione Fedrigoni Fabriano on the 500th death anniversary of the genius from Urbino has enabled us to prove that there is a close correspondence to the watermarked papers used by the master painter and the historic ones collected by Professor Zonghi, which has thus significantly contributed in the scientific progress made on the history of paper

Fabriano, Italy – The great Raffaello (Raphael) too used paper made in Fabriano. The correspondence to the watermarks present in the drawings and sketches of Raffaello with the historic ones collected by Professor Augusto Zonghi in 1884, and preserved by Fondazione Fedrigoni Fabriano, has in fact enabled us to prove to what extent the paper manufactured in Fabriano, had achieved such prestige between the XV and XVI century, as to be used by the most loved artists at the court of Pope Julius II, above all Michelangelo and Raffaello.

The research has been conducted this year on the 500th death anniversary of Raffaello Sanzio (1520-2020): numerous initiatives have been taken up throughout Europe in honour of the ‘god’ from Urbino including Fondazione Fedrigoni Fabriano which has wanted to bring its contribution as well. Beginning with the monumental work commenced in 2017 - the digitalisation of Corpus Chartarum Fabriano and the watermarked paper collection of Augusto Zonghi - the Fondazione has pioneered a research study on Raffaello which entailed the recognition of Raffaello’s watermarked sheets of paper and analysis of the materials used by the artist: an unprecedented autopsic study made on the drawings and sketches.

“It is with great excitement that we have come to learn about the results of the commissioned scientific study - comments Chiara Medioli, Chairman of Fondazione Fedrigoni Fabriano and Vice-Chairman of Fedrigoni Group -: in addition to Michelangelo, a proven user of the paper from Fabriano, by means of the paper sheet used for the letter written to Niccolò Della Buca on 31 July 1514, conserved in Florence in the Buonarroti Archive, we were provide an extraordinary artist like Raffaello too, with our simple, beautiful, strong material”.

Amongst the various types of paper which have been analysed the best known watermarks appear with the shape of an ‘eagle’ an ‘anchor’ ‘an anchor crested by a star’- which were used both by Raffaello and Michelangelo during their stay in Rome, and also watermarks with very peculiar icons: ‘card’, ‘stair’, ‘intersected arrow’ (St Andrea’s cross), ‘trimonzio’ (cross over three hills). Amongst the most interesting specimens was the watermark with the Gothic ‘T’ or ‘Tau’ present on the drawing La Strage degli Innocenti (Museum of Fine Arts, Budapest - inv. 2195) akin to the watermark no. 1430 of Zonghi’s collection which reproduces the ‘Tau’, symbol of the ‘Brotherhood of the Order of the Cavalrymen of Tau’ that inspired frequent artistic-architectural decorations in Fabriano.

In cooperation with interesting synergies of various institutions engaged in protecting Raffaello’s heritage, Fondazione Fedrigoni Fabriano has once again given its contribution to the scientific progress on the History of Paper: the research on Raffaello has indeed paved the way to a new wave of activities related to watermark studies, which serving History of Art, can contribute towards a better critical assessment of the artist’s work, a recognition of his heterographic and autographic production as well as facilitating the definition of an internal chronology of the sheets of paper under study.

Cartiere Miliani Fabriano celebrated Raffaello Sanzio in the past on numerous occasions producing watermarks with his effigies, paper and drawing albums bearing his name. Amongst the 10,000 tools preserved by Fondazione Fedrigoni Fabriano in the Historic Paper Heritage Warehouse there is a variety dedicated to Raffaello (punches, silicones, plates, moulds, wire-cloths for cylinder mould machine and dandy rolls), in particular 15 moulds used in the manufacturing of handmade paper which portray Raffaello and some of his most famous works. Amongst these, a ‘gigantic’ mould measuring 85x115 cm which was handled by three men simultaneously by means of the ancient technique using a ‘girella’ ” (type of pulley tied to a mould by means of a cable), produced in 1983 on occasion of the 500th anniversary of the birth of the artist. A piece of inestimable worth. Furthermore, from about 1947 to 1976 Cartiere Miliani produced a drawing paper album "Raffaello" (today known as “Fabriano 2”) at Pioraco with the Fourdrinier machine.

Fondazione Fedrigoni Fabriano was founded in 2011 by Fedrigoni S.p.a with the mission of promoting studies on the history of paper and watermarks, provide support for the development and spreading of paper sciences, protect historic, archaelogical and archive assets in the paper industry as well as preserving medieval paper manufacturing techniques. Its activities include the conservation and enhancement of archive and library assets, archaelogical findings as well as historic paper assets from the Cartiere Miliani Fabriano owned by Fedrigoni S.p.A.: the Archive of Cartiere Miliani Fabriano, the first enterprise archive ever in the whole of Italy indeed contains all the documents relating to the paper-mill activities starting from its foundation in 1782, including a collection of 1.500 watermarks, 1.200 historic photographs and a library with 3.000 volumes dedicated to the history of paper. Moreover, it conserves 2.000 m2 Historic Paper Assets (BSC), viz. tools and ancient machinery such as the multiple-hammer stamping mill dating back to ‘700s, a screw -press dating back to 1706, cylindrical cloths and cylinders for the manufacturing of paper on the cylinder machine, 6.000 wooden, bronze and copper punches and 2.295 moulds for the manufacturing of handmade paper. From 2016, the collection containing 2.213 “ancient papers of Fabriano” dating from 1267 to 1798 gathered by the watermark scholar Augusto Zonghi, was included in the Archive, which along with the watermark collection of the Archive of Cartiere Miliani forms part of Corpus Chartarum Fabriano (CCF), that are freely accessible to all scholars in advanced digital form. 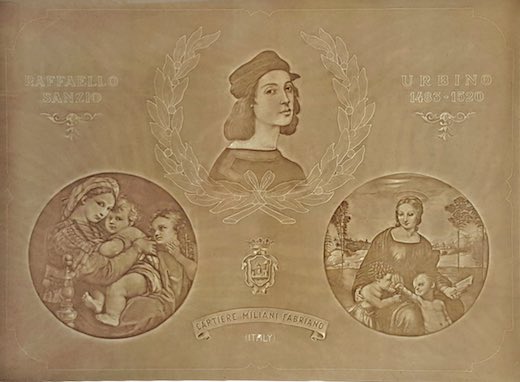