Brixen, Italy / Tallinn, Estonia –Durst has announced the official start of beta testing of its new Tau RSCi label press at label converter LabelPrint OÜ. The new single-pass UV inkjet label press, which was announced at Labelexpo Brussels last year, was installed at its headquarters in Tallinn, Estonia, in July 2020.

LabelPrint OÜ became a Durst Tau 330 customer five years ago. Since then, the company actively developed digital print services to its client base and a trustful relation has been built between Durst and LabelPrint OÜ during the past years. Therefore it was a logical step that Durst approached LabelPrint OÜ as the first-choice beta test candidate. After initial trials in late 2019, Sten Sarap, owner of LabelPrint OÜ, committed to be the beta test site for the new and revolutionary RSCi press. This was postponed for three months due to the Covid-19 lockdown.

The new Tau RSCi features print widths of 330, 420 or 508mm (13, 16.5 or 20 ins) and a higher printing speed of up to 100 linear m/min. New features for the RSC portfolio include a high opacity white print mode for an increased screen-like opacity and a high speed white mode that allows high speed printing at 80 lin. m/min of all colors, including white.

“This new press will mainly be used to transfer longer run flexo jobs onto a digital platform,” said Mr. Sarap. “It is too early to make big statements. However, we are very confident that this new press with its revolutionary print quality and high printing speed will help us to reduce production cost and improve lead times. And thanks to its amazing print quality it will help to innovate our business and make us more competitive.”

He added: “As a company that provides high quality sticker and print labels, the new Tau RSCi label press will be crucial in our mission to offer the shortest possible deadlines and competitive prices to meet customers’ individual requirements and needs.”

LabelPrint OÜs customer base includes beverage manufacturers, chemical and pharmaceutical industries as well as sectors. Formed almost 20 years ago, the company also has a sales office and warehouse at Tartu in the south of Estonia.

Helmuth Munter, Durst’s Segment Manager, Labels and Flexible Packaging, said: “We’re delighted to announce LabelPrint OÜ as the beta test site and wish them ongoing success. Labels continues to be a significant growth business for Durst, not least because increasing numbers of converters are recognizing the benefits of transferring more volume from flexo to our digital platform. The introduction of the Tau RSCi has generated a large amount of interest in the marketplace since it was launched in September.” 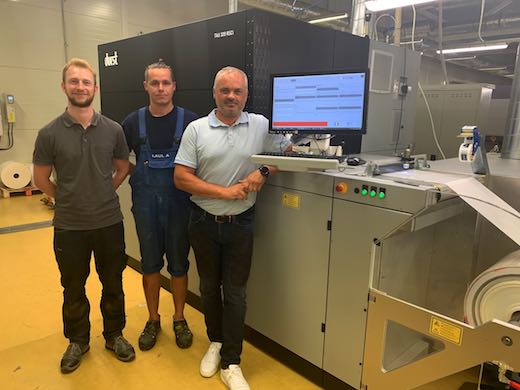