Gerhardshofen – It has been just about one year since WEILBURGER Graphics GmbH, the international manufacturer of coatings, flexo inks and adhesives for the graphic industry based out of the Franconian town of Gerhardshofen took into production its newest and world’s most modern production plant and officially inaugurated it in September in the context of its 140 year anniversary. Due to the exponentially growing order intake and workload it became clear at the beginning of the year that production capacities would have to be increased again. Within the context of this expansion the production flexibility should also be increased, so that in the future all specialty coatings could also be made in the new plant as well. Also, a backup solution in case of partial breakdown of the plant’s system was implemented. This work is already completed, and the company has recently informed its customers about the fact that we can manufacture under ful l capacity again. The new production plant for UV coatings already under construction strides ahead unaffected and will likely enter production according to plan at the beginning of next year.

The company has in this way made the largest facility investment since its foundation, in order to differentiate itself from its competitors in the market segment.

Günter Korbacher, director at WEILBURGER Graphics GmbH added: “We planned our new production plant with enough extra capacity compared to our former production plant therefore within the context of the risks undertook we had an additional capacity of 100 % above our yearly annual production The fact that the new plant would cause an immense demand and that despite – or presumably because of- the continuous quality increase in our products we would need an expansion, was completely unexpected. It was therefore only logical, within the context of our expansion measures to also expand our modular and fully automatic facility control, in a way that our specialty coatings could also be manufactured in this plant from now on. And since a backup system for this installation with comparable performance and flexibility did not exist, we decided in short, to include a backup in the expansion. In this way we can offer our customers increased security even with last minut e production orders.” Günter Korbacher continued: “If our momentarily under construction UV production plant were to develop similarly positive in regards to the demand for our products, we would be able to multiply two years in a row our yearly output in terms of coatings for the graphic industry. “

Parallel to the increased product quality, our new production plant allowed us to increase the work safety for our coworkers as well as the food safety of the products. Therefore, the company will revise its in 2011 introduced product catalogue and the in 2017 expanded ID-number system completely this year. The customers will be notified in time. 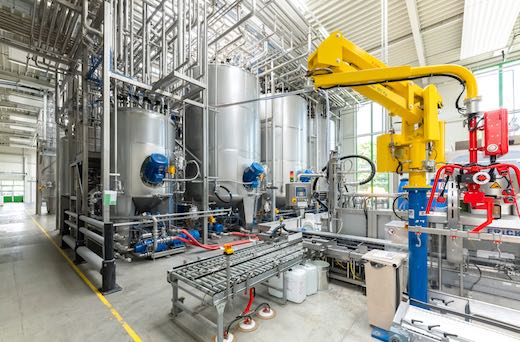 Our new production plant at WEILBURGER Graphics GmbH after finishing the expansion.