Australian researchers have found a way to minimize unsightly pilling and help garments look better longer. HyperCard, the first application for creating interactive documents, was inspired by an acid trip. Fad Fashion? Micro Moments? Learn the new textile lexicon. Rats break into an ATM and eat $17K in cash. A random slide from Mary Meeker’s “Internet Trends Report.” Amazon’s Alexa will soon be sharing your hotel room. A keyboard that can fit in your pocket. All that and more in WhatTheyThink's weekly miscellany.

No more pilling on your sweaters and other garments? What a thought! And now Australian researchers have found a way to minimize unsightly pilling and help garments look better longer. Dr. Alessandra Sutti said, "The key to avoiding pilling is to either remove fluffy fibres or to stabilise the fabric structure so fibres can't easily loosen and tangle. HeiQ's NoFuzz technology bridges the gaps and strengthens loose fibres with adhesive polymer structures, reinforcing fabric yarns and resulting in a significant improvement against pilling." The goal was to be able to stop the pilling while not reducing fabric comfort. In the end, this not only has the effect of making consumers happier with their garment purchases, but can have a significant environmental impact, reducing the waste stream associated with garments discarded too early in their life cycle.

Did you notice when Amazon bought BodyLabs last year? And now they are apparently soliciting people to participate in a body scanning study.

If you can scan your body periodically, and apply that scan data to the apparel you want to buy, you can be better assured that what you buy online will fit -- and the retailer can benefit from reduced returns, minimizing one of their biggest headaches.

It’s not yet clear what Amazon is planning, but you can bet it will be revolutionary. One option already available to consumers is Nettelo from an Israel-based company, currently only available for the Apple iPhone. According to users we have spoken with, you take two photos, and the body scan is accurate within 1 cm in each direction. Amazon will have to beat or buy that!

Legend of a Mind

How many of you remember HyperCard? Released in 1987, it was Apple’s multimedia authoring program for the Mac that let users develop what were the first interactive documents. It was, essentially, the precursor to the first web browser. It was developed by Bill Atkinson, an Apple engineer who had also helped create MacPaint, QuickDraw, and the original Macintosh. And, it turns out, the idea for HyperCard was inspired by an acid trip. Says Atkinson:

In 1985 I swallowed a tiny fleck of gelatin containing a medium dose of LSD, and I spent most of the night sitting on a concrete park bench outside my home in Los Gatos, California.

I gazed up at a hundred billion galaxies each with a hundred billion stars, and each star a giant thermonuclear fusion reaction as powerful as our Sun. And for the first time in my life I knew deep down inside that we are not alone.

I knew that life on planet Earth is not the only pocket of consciousness in the universe, and likely not the most advanced. But we still have a role to play in the unfolding drama of creation.

Wisdom, it seemed to me, was a step further removed, the bigger perspective of the “Why” connections between pieces of knowledge. Why, for reasons ethical and aesthetic, should we choose one future over another?

I thought if we could encourage sharing of ideas between different areas of knowledge, perhaps more of the bigger picture would emerge, and eventually more wisdom might develop. Sort of a trickle-up theory of information leading to knowledge leading to wisdom.

Soon it will come to light that PowerPoint was developed after consuming massive quantities of crystal meth.

There is no question the fashion industry is changing rapidly—cycle times are shortening, and collections must be brought to market faster and more frequently in order to remain competitive, stay current with trends and build consumer loyalty. Many call this aspect Fast Fashion. But now there are two more categories that speed things up even further.

Traditional manufacturing strategies have some difficulty dealing with Fast Fashion, but fad fashion and micro-moments can’t be captured at all traditionally, leaving brands and others with missed opportunity. That’s where digital textile printing and automated cut-and-sew come in. We’ve got lots of on-demand manufacturing stories posted in our Textiles section. Check them out to see how savvy brands, retailers and manufacturers are leveraging new technologies for better performance.

Great article discussing trends helping flexography stay competitive in the face of shorter print runs and cycle times as well as cost considerations. Both digital printing and offset have the ability to eat into flexographic volumes. This research will help flexographic printers stay on top of the trends, understand some of the market data affecting their industry, and provide insight for business strategies moving forward.

With more and more commerce and other transactions moving away from cold, hard cash, “virtual” money does have one advantage: it is less susceptible to being eaten by rats.

Technicians who arrived to fix a malfunctioning cash machine in the Indian state of Assam got a shock when they opened it up.

Police said the rodents probably entered the machine through a hole for wiring, the Hindustan Times reported.

A Pocketful of Keys

Bendable portable keyboards for use with computers and other electronic devices are already on the market, but they have limited flexibility, and they're fairly sizable when rolled up for transport. Now researchers have crafted an inexpensive keyboard that is so tough, flexible and thin that it can be crumpled up and tucked in a pocket without damaging it. The study appears in the journal ACS Applied Materials & Interfaces.

Each week, we play “Mary Meeker Roulette”—randomly picking a slide out of the 294 in Mary Meeker’s latest Internet Trends Report. Round and round she goes… Our second spin lands on Slide 26: “Voice = Product Lift Off.” This shows the Amazon Echo installed base, as well as its (basically Alexa’s) growing repertoire of skills. 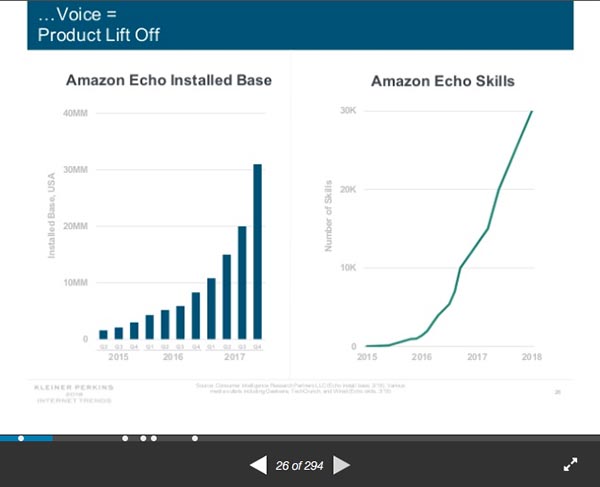 As it turns out, one of those skills is now hotel butler. Says Reuters:

Amazon.com Inc said on Tuesday that it has partnered with Marriott International Inc to help increase guest access to amenities with Alexa, through its voice-controlled device Echo, in an attempt to expand its presence in the hospitality industry.

Alexa for hospitality would assist in providing services ranging from ordering room service to requesting housekeeping or calling the concierge for dinner recommendations without picking up the phone.

It remains to be seen if Alexa can, to quote Bertie Wooster, “buttle with the best of them.”

It has always been fairly common for people to be traumatized by a new technology. Quite Interesting—the “elves” who do all the research for the great British panel show Q.I.—tweeted out this fact:

In 1898, England's first escalator, or 'moving staircase', was installed at London's Harrods store. Traumatised customers were offered free cognac at the top to revive them from their 'ordeal'.

It is also worth repeating the joke from the late, great Mitch Hedberg: “An escalator can never break: it can only become stairs.”

June 18, 1858: Charles Darwin receives a paper from Alfred Russel Wallace that draws eerily identical conclusions about evolution as Darwin had been developing. Darwin thus races to publish his own conclusions.

June 18, 1948: Columbia Records introduces the long-playing (LP) record, which, curiously, is seeing a bit of a renaissance today as a medium for delivering music.

June 20 [year withheld]: Frank Romano born. Shortly thereafter was visited by three “iMagi” bearing gold from Gutenberg’s goldsmith shop, a line of type from Ottmar Myrrh-genthaler, and Frank-incensed when he reads this.

June 20, 1840: Samuel Morse receives the patent for the telegraph, which becomes the dominant communication method. Until...

June 21, 1973: WTF: the Supreme Court hands down the decision in Miller v. California 413 US 15, establishing the Miller test for obscenity in U.S. law.

June 23, 1868: Christopher Latham Sholes receives a patent for the "Type-Writer."

June 23, 1969: IBM announces that it will start pricing its software and services separately from hardware—thus creating the modern software industry.

June 24, 1957: In Roth v. United States, the U.S. Supreme Court rules that obscenity is not protected by the First Amendment. LMFAO.