By WhatTheyThink Staff Published: May 1, 2020

It was only a matter of time before I did one of these #sorrynotsorry pic.twitter.com/bMu23N4iFr

FedEx Office has implemented a Print Preferred program that lets customers get print today and pay later. It eases (perhaps) the financial burden, helps businesses get flyers, posters, etc., produced during a difficult time, but also, since you have to register, it boosts the FedEx Office customer database.

Many people have accused me of plagiarism, but those are their words not mine.#JNN

We’ve all spent more time on Zoom in the last six weeks than in the previous six years and while it can give us the illusion of staying connected (or at least feeling like we’re on The Hollywood Squares), as per the NY Times, it might be having a more negative effect than we think. “Psychologists, computer scientists and neuroscientists say the distortions and delays inherent in video communication can end up making you feel isolated, anxious and disconnected (or more than you were already). You might be better off just talking on the phone.”

if you want to really communicate with someone in a meaningful way, video can be vexing.

This is foremost because human beings are exquisitely sensitive to one another’s facial expressions. Authentic expressions of emotion are an intricate array of minute muscle contractions, particularly around the eyes and mouth, often subconsciously perceived, and essential to our understanding of one another. But those telling twitches all but disappear on pixelated video or, worse, are frozen, smoothed over or delayed to preserve bandwidth.

Say what you will about the Brady’s, but they’ve been “zoom-in” since the 60’s! pic.twitter.com/D4cya7MgYB

Thrown for a Loss

We don’t claim to be the experts on best practices for Zoom meetings, but we can safely offer this bit of advice: don’t throw cats...well, ever, but certainly not while online live. From the Vallejo Times Herald: “[Vallejo Planning Commission member Chris] Platzer was seen drinking a beer and throwing his cat through the air during a commission meeting held via teleconference on April 20. He was also heard by city staff making derogatory remarks after the online meeting had ended. ‘I’m going to call bull— on you little b—s,’ according to the original commission meeting video released by the city on Saturday.”

He subsequently resigned. The cat could not be reached for comment.

Nothing improves a golf course like the absence of golfers.

Last week, we linked to a story about a California reporter who broadcast live from her bathroom, complete with showering partner in the background. This week, we cite the story of an ABC News reporter broadcasting a Good Morning America segment from home, clearly not wearing trousers.

Reeve was speaking with Good Morning America hosts Michael Strahan and Amy Robach about the ways that pharmacies like CVS are exploring strategies to deliver prescriptions via drone. But it’s safe to say that viewers were probably distracted by the fact that Reeve was just chilling on a chair wearing a suit jacket and no pants.

One would have thought a production manager, director, or whoever is coordinating the program would have mentioned it to him before going live, but maybe they decided to prank him instead.

From Packaging World: “Procter & Gamble Beauty has announced that beginning this May at 500 Walmart stores in the U.S., both Old Spice and Secret brand deodorants will be introduced in all-paper, plastic-free, tube packaging.” 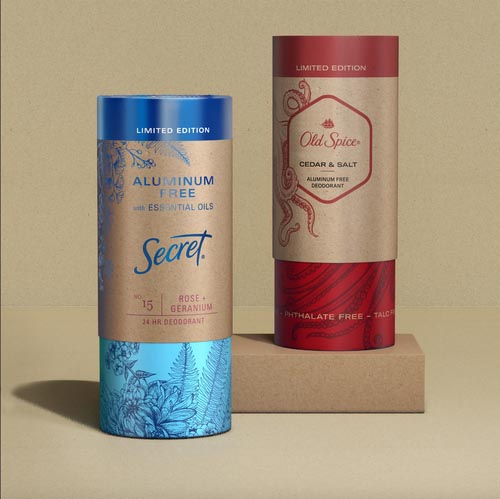 “This paper tube uses 90 percent recycled content and is certified by the FSC. The paperboard tube does not contain wax, plastics, BPA, or PFA. The paperboard has an interior coating that is made from an FDA-approved fluorochemical and corn-derived starch to make the paperboard grease-proof and water-proof. New paper fibers are added to the post-consumer recycled paperboard pulp to strengthen the base material.”

We all agree that March was six years long and April has lasted six minutes, right? Can we get some sort of explanation on that. Genuinely baffled by how elastic time is right now, but more by how we seem to be experiencing it in similar ways.

There is no doubt that discarded plastic is taking a toll on the oceans and endangering marine life and ecosystems. But a small fishing village in Chile could be pointing the way to at least making a tiny inroad into solving the problem. From The Guardian:

Until recently, most discarded fishing nets in this coastal fishing village were dumped straight into the sea – contributing to the massive plastic pollution crisis that’s choking the planet’s oceans....

But a startup called Bureo – founded by three North American surfers – is collaborating with fishermen like Maldonado to keep hundreds of tonnes of discarded nets out of the ocean each year.

Nets are sorted, cleaned, and cut in Bureo’s warehouse in Concepción, a city a few miles from Tumbes. Here they are turned into 100% recycled polyester and nylon pellets, called NetPlus, which are sold to companies as a sustainable alternative to first-use plastics.

Do you miss going out to nightclubs, concerts, or other events? Us, too, but it will probably be a while before people feel safe enough to gather in such close proximity. For those who do want to go out on the town and are more afraid of getting sick than looking ridiculous, a creative consultancy called Production Club has—and we’re not making this up—“unveiled the Micrashell, their concept design for a personal protective suit that would allow the music, live event and nightlife communities to get going again. Covered from head to toe, wearers needn't worry about transmitting or receiving COVID-19, though they could transmit and receive audio via the onboard sound system.” 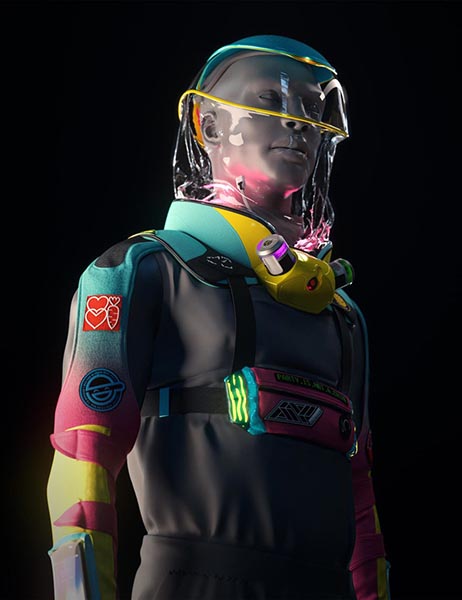 (Yeah, we did a spit take when we first saw that.)

And have no fear, booze and vape cartridges can be snap-fit into the mouthpiece. Dignity be damned! But then, we’ve seen sillier get-ups in nightclubs.

Well, the Washington Post's story about how droplets spread on airplanes wins the award for "gif most likely to give me nightmares FOREVER" https://t.co/vwW3w1Ti3v pic.twitter.com/tQSLMRufN1

Gone to the Dogs

The woes afflicting the USPS have been well-covered (don’t get us started on the ridiculous requirement passed in 2006 that the USPS prefund its long-term pension and healthcare liabilities), but fans of the Postal Service have started a Save the Post Office movement, largely consisting of a stamp-buying spree. But the USPS sells other things as well, and they are not above goofy gift items, such as this U.S Mail Carrier Dog Costume, a steal at $17.99. 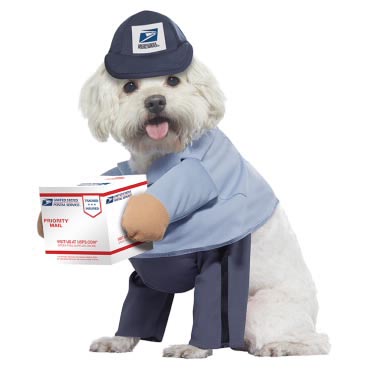 Dear European economists:
If you’re going to say the USPS should be shut down, try remembering our corn fields are bigger than your entire country and people live in the middle of them.

David Zwang mentioned this in his AR feature yesterday, but here is a fun way to keep yourself or your kids entertained. If you type an animal’s name into Google on an iPhone or Android, scroll down to where it says “Meet a Life Size...,” and press “View in 3D,” it accesses your camera and then, a few seconds later, you have that animal in your home. You can take a photo of the kids with them and they can walk around it. We’ve tried tiger, horse, and cheetah. (Thank you Krystin Friling for discovering this!) You can also find:

Get Your Mind Into the Sewer

If a virtual home menagerie isn’t quite your thing, you may instead want to check out Drain Addict, a popular YouTube channel dedicated to—again, we swear we’re not making this up—unclogging drains. It’s no pipe dream: more than 200,000 people subscribe to it, and there are more than 400 videos uploaded, covering the waterfront of residential drains as well as municipal sewage systems. It is not for the squeamish or easily grossed out.

This is simply remarkable work. pic.twitter.com/rbK4lCgmqB 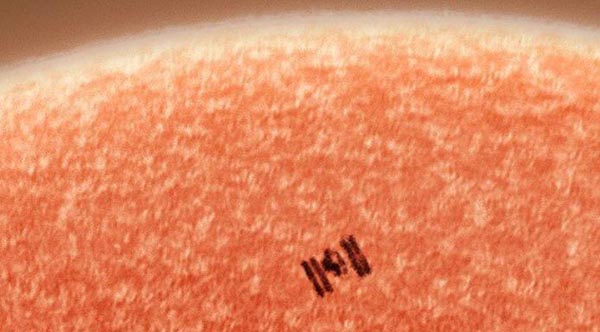 Going for the One

If you’re a fan of 1970s progressive rock, Roger Dean is probably a household name, being the artist who painted all the iconic Yes album covers, among other artists of the period. He also designed the famous Yes “bubble” logo which is still being used by the band today—and, yes, they are still around, and are on their 800th lineup (guitarist Steve Howe and drummer Alan White are the only classic era members who remain after the death of Chris Squire a couple years ago).

Anyway, Yes have a new live album coming out and Dean will be creating the cover for it live on Facebook. “The finished artwork will appear on The Royal Affair: Live packaging, with the first online session scheduled for later today (April 22) at 7pm GMT on the artist’s Facebook page....Dean is planning 30-minute sessions on Mondays, Wednesdays and Fridays.”

1667: Blind and impoverished, John Milton sells the copyright of Paradise Lost for £10. (He never regained it.)

1948: Igor Stravinsky conducted the premiere of his American ballet Orpheus at the New York City Center.

1973: The Dark Side of the Moon by Pink Floyd, recorded in Abbey Road Studios, goes to number one on the US charts, beginning a record-breaking 741-week chart run.

1952: The world’s first ever jet airliner, the De Havilland Comet 1 makes its maiden flight, from London to Johannesburg.

Correction:
In 1981 Xerox introduced the STAR workstation, a comercialized relative of the fabled PARC Alto introduced in 1973. Both used versions of the mouse that evolved from the Doug Engelart's mouse shown in 1968.

Peter, thank you for posting that note. I have always felt terrible that PARC is so often given credit for inventing the mouse and GUI, when Doug Englebart is the true inventor. As I am sure you are aware, the Computer Museum in San Mateo has an Englebart wooden mouse on display (along with a whole lot of other stuff!!).