Copper-infused fabric may protect against COVID-19. Retail signage around a closed NYC reflects the spirit of the city. A courtroom drama shoots a virtual episode over Zoom. The Hamilton cast reunites on Zoom. The Queen wears green-screen green on TV and comedy ensues. Unexpected surge in demand makes both jigsaw puzzle and board game makers fall to pieces. Why have weather forecasts suddenly become less accurate? A new “smart toilet” is trouble waiting to happen. All that and more in WhatTheyThink’s weekly social distancing miscellany.

Could copper-infused fabric be an answer to protecting against COVID-19? Copper Clothing thinks so. Tests still need to be done, but early results with bovine testing show promise.

Can you believe it's only been a month since a month ago?

The New York Times has a pictorial feature of signs—mostly handmade—from retailers and other businesses around a closed New York City. “All along the empty streets of Manhattan, the messages reach out from the newly darkened storefronts. The notes express empathy, resolve, concern, even humor — a reflection of New York’s spirit.” 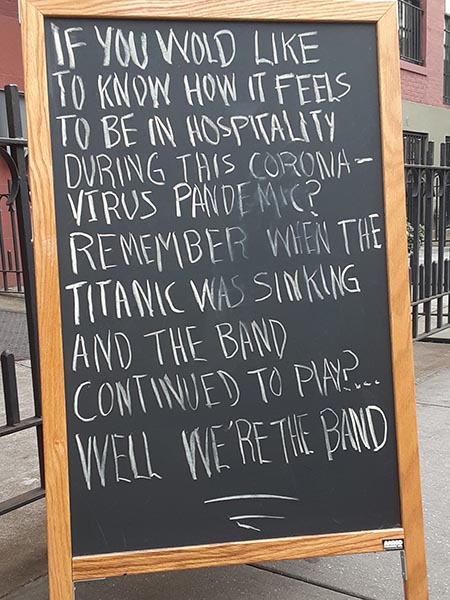 Order in the Lack of Court

If this works, it could completely change film and TV production. From People: “All Rise isn’t letting the coronavirus (COVID-19) slow production down. The CBS courtroom drama is set to film a special episode addressing the global pandemic and how it impacts the criminal justice system. The episode is slated to air in May. In order to abide by social-distancing guidelines, the cast will not reunite to film. The entire episode will be shot using FaceTime, Zoom and other online video technology. Each actor will shoot scenes from their own home before new backgrounds are created in post-production.”

They should bring back the old kids’ show Zoom just to record it on Zoom.

Chag Pesach to all celebrating. Some day, when this is all behind us, Zoom Seder is going to be a great band name.

Speaking of Zoom, the most heartwarming thing you will see all week is the original Broadway cast of Hamilton reuniting on Zoom (via John Krasinski’s new online show Some Good News) to sing the opening number to a 9-year-old superfan of the show. 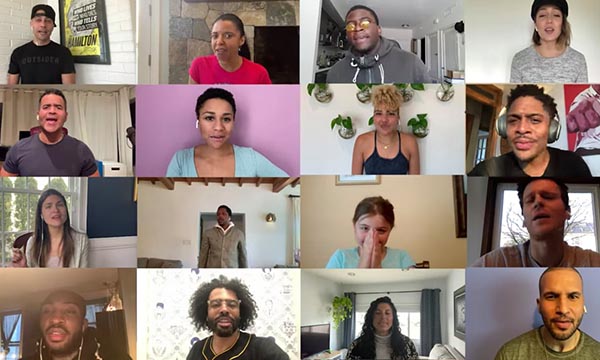 You would have thought by now that people would have learned (or would have savvier advisers who had learned) not to wear green on TV. Last Sunday, Queen Elizabeth II gave a lovely and reassuring speech about the coronavirus situation. However, she did it whilst wearing a green dress and the green-screening began almost immediately. 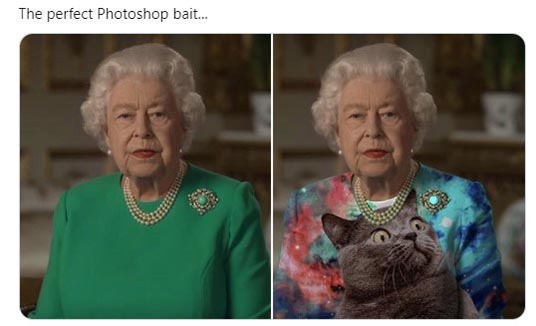 The New York Times takes us inside the taken-completely-by-surprise jigsaw puzzle industry. “The rush to get hold of a jigsaw puzzle — and even stockpiling by regular enthusiasts — has transformed this quiet hobby and put companies under pressure as demand surges past Christmas levels.” Here’s an interesting bit of trivia: jigsaw puzzles are not made with jigsaws—and, in fact, they never were.

Each puzzle piece must be uniquely shaped, to avoid one accidentally fitting into the wrong place. That means 1,000 different shapes for a 1,000-piece puzzle, each drawn by hand by workers. Before a puzzle is cut for the first time, each piece is sketched on a sheet of paper draped over the finished image.

Pieces of metal are then shaped to form an elaborate cookie cutter made just for that jigsaw puzzle; it takes about four weeks to build one. The cutter can be used only a limited number of times before its edges are dulled. It can be resharpened once and must then be discarded. At busy times of the year, the company will go through several cutters a day.

And its not just puzzles. Board games, too, have soared in popularity—causing problems for their supply chains.

Because they’re made of cardboard and plastic and paper, and because almost all of those components are made in China, board game studios and publishers were already behind on their release schedules in 2020 thanks to the combination of China’s earlier Covid-19 shutdowns and the lengthening effect that had on the country’s Lunar New Year’s break.

I know Dogs can’t wait for people to go back to work pic.twitter.com/ggLX6H6e75

Here’s an interesting consequence of the COVID-19 crisis: weather forecasts have become less accurate. Why, you may well ask? Are meteorologists social distancing? Nope: airplanes have been grounded. Explains Core77:

“The significant decrease in air traffic has had a clear impact [on forecast accuracy]. In-flight measurements of ambient temperature and wind speed and direction are a very important source of information for both weather prediction and climate monitoring.

Took this photo at my local park this afternoon. Makes me livid ?? pic.twitter.com/qwc5TxmhSp

If you’re stuck inside and need a lift, what could be better than Patrick Stewart reading a Shakespeare sonnet a day?

This is cool. From the Guardian: “A mutant bacterial enzyme that breaks down plastic bottles for recycling in hours has been created by scientists. The enzyme, originally discovered in a compost heap of leaves, reduced the bottles to chemical building blocks that were then used to make high-quality new bottles. Existing recycling technologies usually produce plastic only good enough for clothing and carpets.”

Um...no. “A smart toilet boasting pressure sensors, artificial intelligence and a camera has been unveiled by researchers who say it could provide a valuable way to keep tabs on our health.” Wait until it gets hacked, then the s**t will hit the fan, among other things.

From The Verge: “British 5G towers are being set on fire because of coronavirus conspiracy theories.”

Someone in my running group ran a marathon in his driveway. All 26.2. I would literally go insane. pic.twitter.com/67a8L88zeN

And now for something completely different. From Boing Boing: “Download this free Danny DeVito as a merman coloring sheet.” 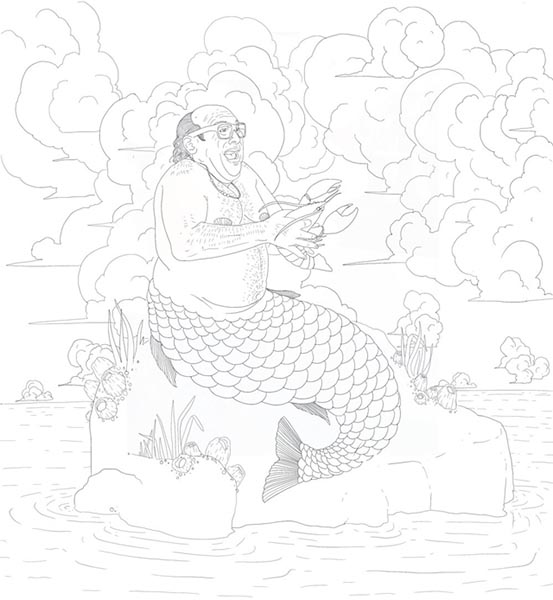 Evidence of Things Not Seen

That car was nowhere as fast as the 32 years. https://t.co/EleaXlAD2p

1949: The Rodgers and Hammerstein musical South Pacific opens on Broadway; it would run for 1,925 performances and win 10 Tony Awards.