“We’ve bought the right machine at the right time. You walk around retail and with every step you take all you see is fabric,” says Dan Pitts, Director at KGK Print Group. The machine he’s referring to is the company’s latest acquisition –– an EFI VUTEk FabriVU 340 dye sublimation printer.

The FabriVU 340 sits in the company’s newly acquired 12,000 sq.ft building in Harlow. This latest production facility was bought and customised to accommodate this new dye sublimation superstar, Monti Antonio heat press, solvent printers and a Zund cutter in a new round of investment worth nearly £2m, taken to service its growing textile base.

A family company, KGK originally began trading over 30 years ago, predominantly specialising in design, printing and installation of wide-format digital print for retail and exhibitions.

Its watershed moment came five years ago, when KGK bought the highly reputable Genix Imaging Limited, a central London-based large-format, direct-to-brand digital printing company with a 30-year heritage. The retirement of the two owners at Genix coupled with the end of the company’s lease on its premises in Soho, led KGK, then its largest supplier, to purchase the company.

The new management moved Genix from its Soho premises and established a new office for the sales and creative teams just behind Oxford Street. It then moved production to a 8, 200 sq.ft production facility in Tottenham Hale. KGK then restructured as a single group comprising four businesses employing 90 staff across four sites. In the time since the Genix acquisition, KGK Group has transformed a £4m business into one turning over £11m.

A time to sublimate
KGK had dipped its toe into fabric printing with the MTEX 5032 Pro at the same time as the Genix purchase but the machine couldn’t cope with demand, and as a result the company was outsourcing work. “We had reached a point where both KGK and Genix had reached a peak with fabric, and we needed to better facilitate it,” says Pitts.

Unsurprisingly, the EFI VUTEk FabriVU was the company’s first port of call. KGK had already purchased eleven printers from this brand through CMYUK, the UK’s largest independent supplier of digital wide format printers, cutters and materials.

The decision to buy the FabriVU – widely considered to be the best dye sublimation printer in the market today – was made at one of CMYUK’s Open Days at its demonstration and training centre in Shrewsbury. Here, the printer was thoroughly put through its paces.

“We took up lots of materials to test and the colour reproduction was bang on. The sharpness was out of this world,” says Pitts. “It was very high quality and fast, but what really helped us make the decision was trusting the level of support. If we have a machine break down or any technical problems, they are very good at helping us to resolve any issues, which is why we’ve stuck with the brand for many years.

“We've had people knocking on our doors offering us for example, far cheaper inks that could save us over £100,000 over a course of a year, but we are loyal. If we stopped investing in EFI VUTEK it wouldn't be bringing out new machines and we’d lose the support we get,” he says.

The company opted for the stand alone FabriVU 340 that requires a separate heat press, thus remaining faithful to the traditional dye-sublimation process. The 340 delivers ultra-high resolution of 2,400dpi in four to 18 picoliter drop sizes at ultra-fast speeds of up to 500 sq.m per hour. With four-colour printing, wide colour gamut and deep colour saturation, it is perfect for profitable soft signage printing such as banners, backlit displays, flags, wall coverings and other high-end display graphics.

New markets
The installation of the FabriVU 340 has allowed KGK to service its existing clients differently, offering them many more solutions than was possible with the MTEX. “We can now offer them so much more, with better quality, quicker turnaround,” says Pitts.

The arrival of the FabriVU has taken fabric output at the Group from 2% to 15%, but which accounts for just 20% of the printer’s total capacity. “We’ve invested in machine capacity, production and office space. We are all about growth,” says Pitts.

However what Pitts wasn’t prepared for was the ability of the FabriVu to attract attention from non-traditional markets. “Like moths to a flame,” says Pitts. “It’s actually quite amazing what we’ve done with the machine without actually having to promote it,” he adds.

Currently, KGK Group is prototyping for companies that have nothing to do with retail and exhibitions, the traditional stalwarts of wide-format digital print.

Says Pitts: “People have contacted us through word of mouth, or they have contacted manufacturers who have recommended us, or they’ve done the research and we've been doing things like printing on towels, printing on sun loungers – personalisation, weird and wonderful things you would never have thought of. We’ve got a client who we’re speaking to now and there is scope to produce a big run of dye sublimation that could keep us very busy!”

Green concerns
The growth in printing on fabrics accentuates the company’s increasing green awareness. In the next 18 months, Pitts sees the market moving to increasingly eco-friendly solutions. While the company is already using recyclable products, it plans to use more and avoid materials going into landfill. “We take green issues very seriously,” says Pitts. To this end it has employed a new waste management consultant charged with a zero landfill target. The company has also installed polyester-only waste bins which, when filled are then taken away for recycling. 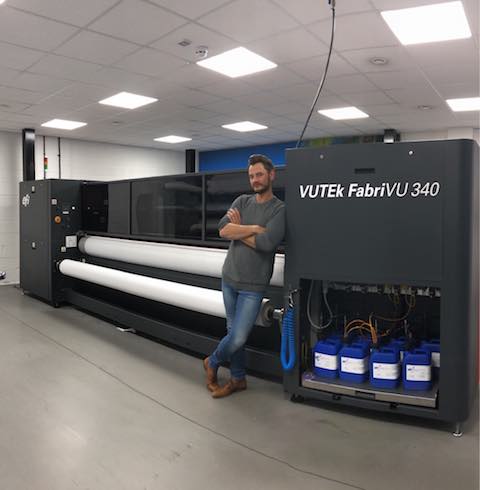