Heidelberger Druckmaschinen AG (Heidelberg) is celebrating 70 years of expertise in the development, assembly, production, and application of Stahlfolder folding machines from the Ludwigsburg site under the motto “Feel the Experience”. During this time there has been consistent progress in postpress – from the handcrafted folding machine of the past to today’s highly automated and digitally integrated folding machine. “We will continue to use our experience from 70 years of folding machines to expand our portfolio for industrial postpress with regard to digital integration,” explains Michael Neugart, Head of Heidelberg Postpress. “Foremost here will be the future requirements of customers, as demonstrated by the market success of the current Peak Performance Stahlfolder TH/KH 82-P folding machine.”

The Stahlfolder TH/KH 82-P machines introduced in 2016 are characterized by their patented solutions for “shingled folding”, and are aimed specifically at industrialized print shops and specialist bookbinders. The Stahlfolder KH 82 has been available since drupa 2008. It appeals to customers looking for a versatile, flexible, easy to operate, reliable, and compact folding machine. With over 400 installed machines, the KH 82 is the best-selling fully automatic combination folding machine on the market. To celebrate the anniversary, Heidelberg is offering a limited number of Stahlfolder KH 82 machines as an “anniversary edition” on attractive terms with a special price and shorter delivery times. The company is also offering folding training tailored to its customers in order to increase their productivity.

Customers can find all the details about the offers as well as read about the history of the Stahlfolder machines and register for folding webinars on the specially designed anniversary website www.heidelberg.com/Stahlfolder/70years.

Heidelberg also has big plans for the coming decades: “We will continue to develop our folding machines in accordance with our customers’ wishes in the future also, and see big growth potential in postpress. The focus will be on even greater user friendliness, as well as networking and integration into the workflow, as a means to transparency and continuous monitoring,” confirms Michael Neugart.

Continued development of the postpress portfolio in the direction of industrial postpress
When it comes to printing presses, the Push to Stop concept has already proven itself in numerous installations. The processes are digitalized and integrated, and the operator only intervenes when necessary. Heidelberg has now transferred this innovative philosophy to postpress. At the Commercial Day, which took place on 23 May at the Wiesloch-Walldorf site, visitors learned how several different signatures or jobs in the same format and with the same fold type can be produced on a shared pallet on a Stahlfolder KH 82-P. The signature change is detected on the sheet and all the measures necessary for the job change are automatically executed. The Stahlfolder KH 82-anniversary edition was also on display at the same event.

70 years of the Stahlfolder: milestones at a glance

1950 Kurt Stahl builds the first folding machine himself, Adolf I. Döpfert sets up sales. This is limited to Germany in the first few years and is then expanded by Heidelberg’s worldwide sales and service network.

1954 The folding machine range is unveiled at drupa.

1986 The first fully automatic buckle plate folding machine CFC 66 with 25 servo motors is presented at drupa. The Computer Instruction Center CIS means the folding programs can be created and calculated on the PC. The folding machine is thus preset.

1994 Stahl acquires McCain-Brehmer Buchbindereimaschinen GmbH in Leipzig. Production of saddle stitchers is bundled there and the new FS 100 thread-sealing machine is developed.

1995 The TD/KD series with the DCT 2000 control system developed in-house is presented at drupa.

1999 Heidelberg takes over the Stahl Group with sites in Ludwigsburg, Leipzig, and Sidney/Ohio.

2000 Folding machines under the name Stahlfolder are presented for the first time at drupa.

2004 The new generation of Stahlfolder TH/KH folders is launched. These are awarded the Red Dot Design Prize and the PIA/GATF InterTech Award. To date, more than 3,500 machines have been delivered.

2006 Production of the KHC 78 and KHC 66 folding machines is started at the Qingpu plant in Shanghai.

2008 The Stahlfolder KH 82 with automated cross-fold unit is unveiled at drupa. For the first time, this machine also performs cross folds at 230 meters per minute and reduces makeready times in the cross-fold unit by 80 percent.

2012 The innovative PFX feeder, which enables shingled folding, is introduced.

2014 Heidelberg closes the Leipzig site.
Production of the KHC folding machines in Qingpu comes to an end.

2016 The Stahlfolder TH 82-P and KH 82-P are presented at drupa. These models enable full and continuous shingled processing of the sheets for the first time, from the first station to the last, with both parallel and cross folding. Machine productivity is increased by up to 100% without any increase in machine speed.

2019 Stahlfolder celebrates 70 years in existence. For the anniversary year, the Stahlfolder KH 82, the most popular folding machine worldwide, is offered as a limited “anniversary edition” at a special price. 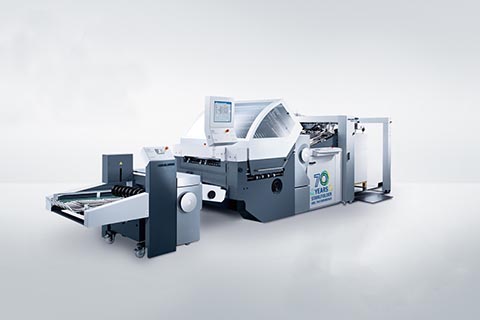 The Stahlfolder KH 82-anniversary edition is brought out as a limited edition at a special price for the 70th anniversary.