BST eltromat’s iPQ-Center reflects developments in the production-quality requirements placed on the printing and packaging industry.

Bielefeld – BST eltromat International’s iPQ-Center offers flexo and gravure printing companies comprehensive ways of controlling and assuring their production quality. The history of the modular solution suite reflects the dynamism with which quality requirements in the packaging industry have developed over the decades. It also documents how BST eltromat is proactively driving this development forward. At the same time, a glance at the history of the iPQ-Center allows conclusions to be drawn for further development in the age of Industry 4.0.

“We entered the quality assurance systems market as a manufacturer at a time when web guiding technology was increasingly going electronic,” says BST eltromat’s Head of Product Development for Web Handling Jürgen Bettführ. He is referring to the year 1979, when BST Servo-Technik GmbH was founded in Bielefeld, Germany. In the same year, the company introduced an innovative web guiding system with infrared edge sensors (IR1 and IR2) to the market, as well as the EKR 1 analog compact controller. Webs could now be guided through printing machines with previously unheard-of quality. Henceforth an important quality feature – particularly when it comes to package printing.

The ekr 2000 multifunction controller moved the boundaries
By the time the 1990 drupa exhibition took place, BST had pioneered the use of digital, rather than analog, technology for components in its web guiding systems, and it introduced the ekr 2000 multifunction controller at the event. Back then, the turn of the millennium still seemed a long way off. Even the product name featuring the number 2000 signaled groundbreaking technology. And indeed, the technology made quite an impression in the market.

The ekr 2000 system was thus the world’s first microprocessor-controlled control amplifier for web guiding systems based on web edges and print features. For most jobs, it was enough to press two buttons and the system was set – this was a revolution in the advancement of user friendliness. The new membrane keypads, which featured keys with colored outlines for various operating levels made it easier to set up the web guiding system and to access the operating functions. In addition, the system featured an innovative, integrated digital display. The user interface was clearer and more intuitive than ever. BST eltromat controllers still work according to a similar principle today, which illustrates how technical advances made back then still influence the way we work now.

The possibility of controlling on the basis of print features – either lines or contrasts – as well as web edges, made web guiding systems more flexible than ever. The new controller also offered an increased level of automation. It also offered features such as automated material comparison for transparent film, including contamination compensation, automated edge seeking, and width adjustment. An automatic sensor adjustment feature could also be connected via fieldbus. The sensors automatically adjusted to changing web widths. Web width checking was also an integrated feature.

Thanks to its interfaces and the integrated fieldbus with plug & play characteristics, the ekr 2000 was easy to integrate into machine control systems. The module-based hardware and software was flexible and could be adjusted to customer requirements. Automation, integration, and an ability to respond to individual requirements flexibly – three of the criteria that customers now focus on when making an investment decision – began to take off.

Soon, the industries were no longer happy with merely perfectly regulating a web’s passage through printing machines. New technology now also offered control over the (printing) quality of running webs. In the early 1980s, BST introduced ‘Rota-speed,’ a monitoring system it had developed for running webs. It was followed in 1986 by the innovative mirror drum system Webscope. This system had a mirror drum with 20 faces, which enabled it to conduct optomechanical web monitoring in printing machines with an unprecedented level of reliability. By 1987/88, BST had already developed another device, ‘Videoscope,’ which was based on state-of-the-art video technology with high-definition cameras and high-quality lenses. The strong magnification capability introduced the possibility of detailed monitoring. Printing companies that used both Webscope and Videoscope were able to better utilize the productivity of their printing machines by using the latest information about their print images. Machine operators were also well-placed to reduce waste: If there was a defect, they could now intervene straight away – while printing was taking place – which back then was by no means the norm.

100% Inspection with Nota Save
At almost the same time and just a few kilometers from Bielefeld, eltromat, which was founded in 1960, was working in Leopoldshöhe on the development of a 100% inspection system. This was after register control systems had already established themselves worldwide. “Nota Save was a system for 100% inspection in security printing. Developed jointly with KBA, Nota Save was used in that company’s sheet-fed printing machines for inspecting bank notes from 1995 onwards,” recalls Dirk Völlmecke, Head of Product Development for Vision Systems at BST eltromat.

The system fulfilled the special requirements of security printing; it carried out reliable checks of the security features printed on the bank notes and identified printing defects and deviations from targets. In short, Nota Save made sure that security printing jobs were produced to the required quality standards. To achieve this, they used a special technology that was developed in Leopoldshöhe. The image data gathered from the sophisticated process of security printing was processed on internally developed hardware plug-in cards and subsequently analyzed. Europe, USA, Asia, Australia – KBA printing machines featuring Nota Save inspection systems were in use around the world.

Nota Save later became PrintCheck, a system for inspecting flexible packaging. Nota Save was designed for sheet-feed printing. As a result, the development of PrintCheck involved a radical rethink. After all, the challenge was to capture high-quality, stationary images from fast-moving webs. In turn, this led, by 2010, to the development of the twin_check inspection system, which combined web monitoring with 100% inspection. The development focus increasingly shifted from hardware to software.

While eltromat was developing the 100% inspection and video systems, BST was developing similar systems at the same time. One example is the VIDEOCheck system, which BST started selling in 1998. VIDEOCheck made it possible to automatically and reliably identify a variety of printing defects – such as ink splashes, streaks, ink mist, register deviations and color variations – in various web printing manufacturing. The performance of quality-assurance systems for flexo and gravure printing had undergone another quantum leap. Until now, however, they have existed in isolation.

iPQ-Center – modular product line for central control of quality-assurance functions
At drupa 2012, BST – with its QCenter – presented a modular product line for the first time. This line merged various quality-assurance functions for web printing such as web monitoring, 100% inspection, and spectral color measurement on a single platform and was operated centrally and intuitively using a touchscreen. Based on the existing foundations at BST and eltromat, the iPQ-Center was developed after the merger of the two companies in 2014. The acronym iPQ stands for “increasing Productivity & Quality.”

This high-end solution now comprises four mutually integrated modules within the iPQ-Center: iPQ-Check for 100% print inspection, iPQ-View for digital web monitoring, iPQ-Spectral for spectral inline color measurement – BST eltromat undertook pioneering work in this area together with X-Rite –, and iPQ-Workflow as the connective element. The sum total of the functionality of these modules covers practically all current requirements when it comes to the control and monitoring of web printing quality.

Cross-manufacturer system integration
In the age of Industry 4.0, it is obvious where the next stage of the journey will take us: Digital information and communications technology makes it possible to integrate process steps that were previously separate, and to interpret data in specific ways – particularly across manufacturers and/or systems. The aim is to make corporate processes more efficient and productive and to continue to increase the level of automation involved. “The basis for this is comprehensive communication. This in turn requires standardized interfaces, the willingness for close cooperation across the whole company, and the ability to network components, products, and processes,” states Dr. Michael Dattner, Innovation Manager at BST eltromat.

In practice, the company links many of its quality assurance systems together. The company is also working on linking these with complementary solutions by other manufacturers via open interfaces along the value chain in order to provide customers with comprehensive solutions.

For example, together with partners such as Colorware, the manufacturer of the color management software MeasureColor, and pre-press specialist Carl Ostermann Erben GmbH (COE) a concept was presented for the integration of pre-press, printing, and inline spectral color measurement. In this concept, the pre-press provides all necessary data to the iPQ-Spectral. This system has been expanded by the addition of 100% print inspection with the BST eltromat iPQ-Check. All the job data is thus captured once in the pre-press and is subsequently made available throughout the production process. The data is supplied either as XML or JDF files to the control units of the quality assurance systems, allowing these systems to be set up and controlled without additional intervention by the operator. As the entire relevant job data is entered at pre-press, and later made available throughout the production process, the set-up times are significantly reduced. At the same time, any sources of defects resulting from multiple data capture at different stages in the value chain are reduced.

BST eltromat and Colorware round off their cooperation with Cospecto process analysis from the manufacturer of the same name. This analysis tool allows for a clear representation of machine and process data and offers a basis for additional and far-reaching process optimizations.

Another example is the complete integration of iPQ-Spectral into the production process of a globally active packaging manufacturer. The result is that information from various company databases is supplied to the inline spectral color measurement tool, automatically triggering the set-up of the system. System set-up has been completely automated. The color values measured by these smart sensors are, in turn, fed from the iPQ-Spectral back to the customer’s database.

A third example, found in the area of converting, is the linking of BST eltromat’s quality assurance systems with the integrative platform [email protected] from KAMPF Schneid- und Wickeltechnik. This platform links components, systems, and machines and feeds status messages to machine operators. The benefits of this link-up were demonstrated last year at the ICE trade fair using a KAMPF rewinder equipped with a web guiding system and an iPQ-Check from BST eltromat. [email protected] received the sensor signals from the web guiding system in real time and displayed them visually. The machine operators can check how the web position changes across the web and thus evaluate the winding quality. iPQ-Check, thanks to its reliable print defect detection system, was able to monitor production and send error signals to the KAMPF cockpit.

BST eltromat has implemented numerous customer-specific integration projects in various industries, also linking its quality assurance solutions to ERP systems in the process. Additional challenges will need to be met here in the future. Furthermore, BST eltromat will add even more practical experience to its quality assurance systems and will make use of technical innovations in order to make operation for machine users even simpler and safer. The iPQ-Center is sure to receive additional tasks in the future concerning to quality assurance in web printing. The history of the iPQ-Center thus continues to be written. 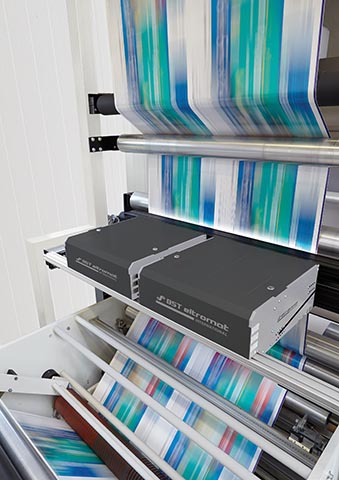 The powerful line cameras in the iPQ-Center module iPQ-Check for 100% printing provide detailed color data across the entire printing format and log the production results.