The printing industry lost a true icon with the passing of Dr. Zeke Prust last week in Phoenix. “Zeke was a one-in-a-million individual who touched so many people’s lives and represented our industry with professionalism, grace, and dignity,” noted Printing Industries of America President and CEO Michael Makin. 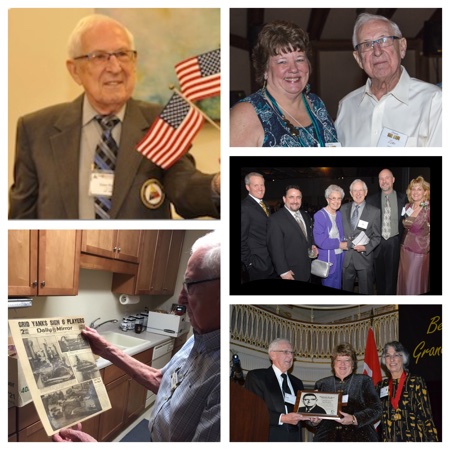 Prust was born on March 4, 1924 in Green Bay, Wisconsin. He served in the United States Army during World War II, and while assigned to the 10th Armored Division he landed on Omaha Beach and fought in the Battle of the Bulge.

Prust married the love of his life, Mary Ann Dodge, and co-owned a small printing company in Wisconsin before moving to Arizona in 1955 where he initially taught printing at the Phoenix Union High School. In 1958, he started the Graphic Communications program at Arizona State University and spent the next 27 years as a professor and Department Chair. He also served as the Associate Director of the Division of Technology and the Director of Graduate Programs for the Division of Technology.

Prust served many different graphic arts associations, educational institutions, and foundations. He was the Executive Director Emeritus for the Printing Industries of Arizona (PIAZ), the predecessor organization of Western States Printing Alliance (WSPA). He authored four textbooks and numerous industry articles. He was also recognized with countless industry awards throughout his lifetime.

As ASU Professor Dr. Thomas Schildgen noted, "Zeke was considered by his peers to be an ambassador for graphic communications and the graphic arts industry. His accomplishments, both professionally and personally, have been an inspiration to his students, fellow faculty members, and the entire graphic arts community."

Arizona print leader Kevin Runbeck added, "He was a gentle, devoted family man who always made you feel welcome. He was a true mentor to me and all who knew him. He lived a long, wonderful, and meaningful life. I wish we had him a little longer."

Prust and his late wife had two children and three grandchildren. The date of his Memorial Service has yet to be announced.

I am deeply saddened.

One of my fondest recollections goes back to the mid-1980s when Zeke and I took six students (three for Arizona State University and three from Cal Poly) on a tour of the Northern Italy printing, publishing, and gravure press manufacturing industry, sponsored by the Italian Trade Commission. We had a wonderful time together.

I shall miss my good friend and academic/industry colleague. Zeke was a true and thoughtful gentleman.