The last chapter for the ‘History of the Linotype Company’

“We probably use Helvetica every day and I dedicated the book to the person who was responsible for taking a Swiss typeface and making it a household word.”

Frank Romano got the idea for his book 50 years ago when he began working in the mailroom of the Mergenthaler Linotype Co. When the company was changing headquarters, he was assigned to pack up the executive suite for the move.

“Well, I saved the materials and carried it from home to home and office to office,” said Romano. Five years ago, he began assembling and studying his collected materials and the result is a new book on the history of one of the landmark typesetting and printing industries. It’s the latest volume by the RIT professor emeritus and renowned authority on graphic communications, printing and publishing—author of 50 books.

His new book, History of the Linotype Company, published by RIT Press, chronicles a business that lasted 127 years—from 1886 to 2013. With Ottmar Mergenthaler’s invention of the Linotype machine, the company became the world’s leading manufacturers of books and newspaper typesetting equipment in North America. Romano’s research details the products, the people, and the corporate activities that kept the company ahead of its competition in hot metal, phototypesetting and pre-press technology. Over 10 corporate entities eventually formed the U.S. manufacturer, which ended its corporate life as a division of a German press maker. 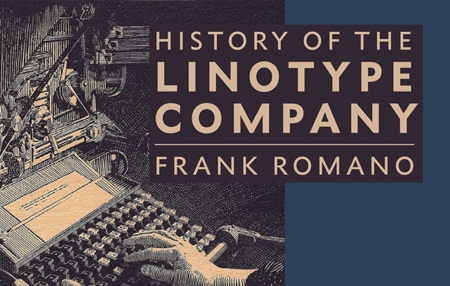 Adding depth to the historical account, Romano saved every press release and photographs from industry companies when he owned a magazine called TypeWorld. “And through Doug Wilson, who made a documentary about the Linotype, I was able to acquire some very rare material from Ottmar Mergenthaler’s daughter and granddaughter,” explained Romano.

According to Romano, nearly 3,000 hot-metal fonts were manufactured by Mergenthaler Linotype from 1886 to 1972. The final chapter of the book contains two comprehensive lists featuring the artwork for every font that Lintoype donated to the Smithsonian in 1998—now housed in the Museum of Printing in North Andover, Mass.

“It’s not easy to encapsulate the heart and soul of an organization, but I tried,” said Romano. “After 127 years, the last resting place of the Linotype Company is in this book.”

Professor Romano. I am an RIT GA publishing alumni. I just got a copy of your book and think it´s wonderful. I just wanted to let you know I work for a printing company in Colombia where we have a full working linotype. It is used mainly for teaching students the history of printing.