Transitioning from one printer technology to another can often be intimidating. It is particularly important for printing companies, like DFS, to make the right choice. The company prints transactional documents such as bank statements and tax forms that include critical information. Daniel Chavez, chief operations officer and a DFS employee since the company’s 2002 inception, decided three years ago to take on the major challenge of upgrading its printer technology. DFS switched from a cut sheet printer operation to an inkjet continuous printer platform. This technology change not only included a new inkjet printer, but also the Tecnau Stack 2020 and its Dynamic Perforator TC 1550.

The first step in making this transition involved selecting a print provider. Before making this key decision, Mr. Chavez looked at just about every supplier in the market. He initially selected a press vendor that offered a turnkey solution, hardware as well as maintenance services, plus the Tecnau Stack 2020 finishing line. The runner up at the time, SCREEN Americas, promoted a self-maintenance plan. “The self-maintenance program was a big concern. I just wasn’t ready to be in the service industry,” stated Mr. Chavez.

However, Daniel ultimately decided that the SCREEN offering, the Truepress Jet520 NX, was right for DFS, while still including the Tecnau Stack 2020 finishing line. The new Tecnau/SCREEN solution was up and running within one week. “With a reliable print engine and the Stack 2020, we gained a five-fold increase in speed. We went to 18” rolls, printing on both sides with a slit merge, and ending up with an 8 ½” X 11” finished product. It was just amazing,” declared Daniel.

Once DFS transitioned to the SCREEN solution, it also moved to a self-maintenance environment. Mr. Chavez promoted two of his best operators and converted their roles into hybrid positions. By following procedures, the equipment has been easily maintained and issues have been nearly non-existent. The team has only had to deal with the normal wear and tear on parts. The company may be stocking more parts, but overall, it has worked out very well. It has resulted in a 30 percent savings over hiring an outside third-party vendor to service the equipment. “For someone who was so afraid to be a self-maintenance company, I am now eating my own words. To have more control has been very nice,” stated Daniel.

The Tecnau Stack 2020 has performed beyond DFS’s expectations. “It has been running 24 X 7 for 38 days straight. It is a real workhorse,” professed Chavez. Over 40 million 8 ½” X 11” sheets of paper have gone through the finishing line. It has become a critical line in the transactional space with over 100 million impressions and 12 million statements in one month. This level of output is made possible with the help of the Stack 2020 system’s Smooth-Web™ motion technology that gently transports paper from the printer to stacked output. This synchronization of the entire web to changes in speed provides unprecedented reliability and drastically reduces the likelihood of any paper jams.

Plus, Daniel considers the Dynamic Perforator TC 1550 “the Cadillac version of perforators”. DFS has used it for many different types of applications ranging from coupon books with multiple perforations and custom ID cards to single perforation bank and tax statements. According to Mr. Chavez, “Regardless of the number of perforations, the speed of the equipment is never compromised.”

Not only did the Tecnau equipment stand out from the competition, but also the Tecnau team stood out to Daniel. As Mr. Chavez noted, “They do everything, which was promised in the sales pitch. The sales rep still called me regularly even after the equipment was purchased and installed. His level of service was a key deciding factor when I selected Tecnau again.”

When replacement parts are needed, the Tecnau team is there to answer the phone. There is no texting or emailing and then waiting for a response. Parts are expedited without any hesitation. “This outstanding level of service just seems to be the Tecnau way no matter who you are calling within the organization. It has far exceeded my expectations,” stated Daniel.

In 2021, DFS plans to install a second line, which will include Tecnau equipment. “The Tecnau solution may not be the least expensive option in the market, but the company’s integrity and doing what they say has spoken volumes to me,” proclaimed Mr. Chavez. 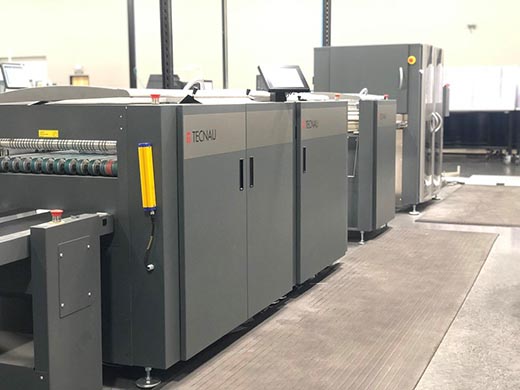