WhatTheyThink attended a pre-drupa event for Highcon at their headquarters and manufacturing facilities in Yavne, Israel. We were able to get an early look at what will be on full display at the Dusseldorf trade fair. The takeaway is that in four short years Highcon has gone from a single machine to a full portfolio of digital finishing products.

It seems the WhatTheyThink team has been passing each other in criss crossing the globe lately covering the many pre-drupa events.  The calendar has been packed with events centered around what we'll soon see at the messe in Dusseldorf while at drupa 2016.  I was recently in Israel at the invitation of Highcon to take a look at what they have in store for the industry when we meet in Germany in less than three months.

Press, analysts, customers, and prospects were all treated to a well run event that showcased how far Highcon has come since last we saw the debut of their technology at drupa 2012.

The biggest takeaway for me was how far the company has come in the development and commercialization of their products in four short years.  Up to now Highcon was Euclid, their first commercial release that now has over 25 installations worldwide.  Visitors to the Highcon booth at drupa this year will see a complete portfolio of digital finishing equipment, covering all segments of the market and a range of applications from short-run to high speed production.

The Euclid III is an update to the flagship Euclid line and was the first machine we all saw at drupa 2012.  Event visitors were able to get an up close and personal look at this machine and the enabling technologies inside.  Foundational among these technologies is Highcon's proprietary DART (Digital Adhesive Rule Technology), which replaces traditional rules and channels with a polymer on a plastic film they currently call a foil.  It acts as a hybrid between a plate and a die.  I suggested they call it a plie, since foil doesn't seem to quite fit.

Once a rule is made it is UV cured and ready to crease jobs in the first station.  Cutting is handled by lasers in another module and output to the end of the machine.  Euclid production is rated at 1,500 sheets/hour. 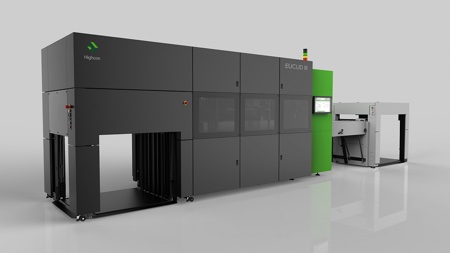 The Highcon Beam is perhaps the most exciting of the new offerings we'll see at drupa this year.  This is a high end machine aimed at mainstream production environments and is capable of up to 5,000 sheets/hour.  Highcon has added more powerful lasers that enable the higher speeds.

It will be interesting to see the impact this new machine has on the market.  Beam will be capable of running in a more traditional high speed environment and will fit in a mixed press environment as well as a traditional offset shop. 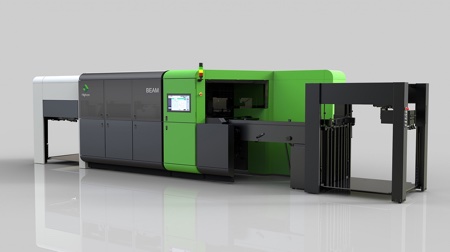 Pulse is the entry-level offering from Highcon that will make this technology much more accessible to the industry.  Printers will be able to run B2 format jobs at a rate of up to 2,000 sheets/hour.  A smaller footprint and lower investment will make Pulse very desireable for smaller shops or largers ones wanting to get into high margin cutting and packaging applications. 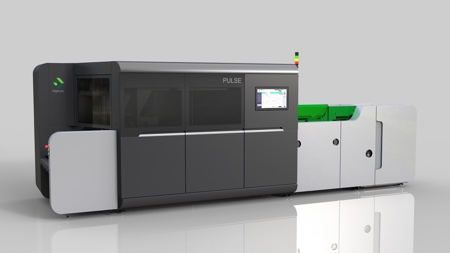 We'll also see Highcon's 2D to 3D platform Axis, a web-to-print module, and a 3D modeling package that will enable customers to get into layered 3D modeling using paper.

This is clearly an exciting time for Highcon.  Their booth at drupa should be very busy - An expanded booth presence from 150 square meters in 2008 to over 1,000 square meters this time around.  They'll need the footprint for the portfolio, but the expanded prescense also speaks to the ambitious goals of the company and the impact they are having on the way we think about cutting and creasing.

Highcon is working on an embossing technology.  Up to now the DART creasing technology has been used for some rudimentary embossing, but the materials we saw could someday offer much better quality and refined "resolution" for embossing applications.  Embossing most likely will be an additional module inline among the DART creasing and laser cutting modules.  Along with the materials science involved in getting the right kind of polymer to apply to sheets ("foils") to give an embossing effect, considerations for how to most efficiently allow for embossing or debossing inline will need to be engineered.

Highcon has not only pioneered "digital cutting and creasing", but is changing the game again by offering a full platform of devices capable of serving every segment of the print service provider market.

For those interested in commercial availability, here is what we were told in Israel for each product.