Kennesaw, Ga. – Heidelberg’s Relocation Services are changing the game for companies throughout North America who are planning on relocating equipment either internally or to a new facility by offering an efficient and dependable option. Toof American Digital Printing and Modern Litho are two recent success stories— thanks to the expertise Heidelberg provides in its ability to move not only its own equipment but also that of its competitors.

“We were given a 7-day schedule from Heidelberg to dismantle, transport, and be back up and running. Once the Heidelberg guys left the room, we all snickered at the quote,” said Stilly McFadden, President of Toof American Digital Printing. “We didn’t believe they could do it, but they definitely proved us wrong!”

In order to make sure that the equipment is ready for production, Heidelberg takes care of every aspect of the relocation. Toof American Digital Printing found that one of the biggest benefits of using Heidelberg’s Relocation Services was how the service team worked with them to plan the schedule for assembly and disassembly of units and presses one production flow at a time. Heidelberg also worked with Toof by creating floorplans so the most effective equipment placement could be determined in the new print shop in order to increase productivity.

“Heidelberg really fine-tuned the whole move by being involved in every aspect of it—from where our machines should be set up to which machines would be taken down first,” said McFadden. “The most impressive part of the whole thing was we were never fully down in our production cycle— Heidelberg worked it out that we always had a machine running. It allowed us to keep up with our customers’ needs and keep a steady relationship. We were most worried about moving the equipment when it came to this relocation, but Heidelberg made it completely stress-free.”

Originally founded in 1864, Toof American Digital Printing leads the industry as the oldest and largest commercial printing provider in the mid-south. Headquartered in Memphis, Tennessee, Toof American Digital offers digital, sheetfed and web printing, as well as fulfillment and direct mail services paired with the best-in-class shipping and distribution capabilities via its proximity to the FedEx World and Ground Hubs.

Modern Litho’s First Choice Partner even with Competitive Equipment
Modern Litho of Jefferson City, Missouri recently acquired another company and decided to move the equipment to a new facility. When looking for a service company to move this equipment, Modern Litho needed the service to be provided at a competitive price and from a reliable source. Being a long-time customer of Heidelberg, Modern Litho didn’t initially consider Heidelberg for the relocation services considering most of the recently acquired equipment was technology from other manufacturers.

“It wasn’t until I was talking to my Heidelberg Service Manager about this relocation that he told me that Heidelberg was actually able to move other manufacturers’ technology at a competitive price,” said Jim Tomblinson, Vice President of Operations at Modern Litho. “We decided to take the offer and go with it since we knew that Heidelberg would take care of us.”

The service covers the installation of a pre-assembled press or presses and components that have been dismantled for transportation purposes, which includes testing all functions and software. Once completed, the press is handed over with a Heidelberg quality Press Registration Evaluation report, even for competitive equipment. All other graphic arts equipment relocated is returned to prior running condition before the job is closed.

“We worked with great men who were very professional and obviously had extensive experience in the printing industry,” said Tomblinson. “The biggest takeaway we had was that we now understood the Heidelberg commitment to us is not only on a new piece of equipment, but that they are a partner that will be there for service and support, even if it doesn’t always deal with Heidelberg equipment. Heidelberg is trusted and reliable, and no matter what need, we know that they will take care of us.”

For eight decades, both local and national member organizations and companies seeking excellence in commercial and digital print have trusted Modern Litho for their communication and marketing needs. Modern Litho takes pride in investing in state-of-the-art capabilities, equipment, and systems to increase efficiency, accelerate delivery times and print with superior quality. 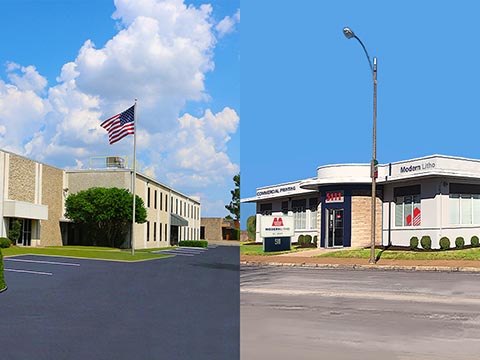 Left to right: the outside of the Toof American Digital Printing facility and the Modern Litho facility.