drupa and VDMA announce launch of the 3D fab+print brand 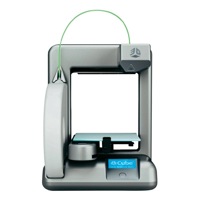 Almost unnoticed, revolutionary production technologies have emerged without any meaningful input from big players. Instead, the initiatives came from researchers, small start-ups and tinkerers in their garages who experimented with printing three-dimensional stuff. As is common with all technical revolutions, the “movement“ thrives on its early protagonists’ enthusiasm, which in our case happens to be mostly made up of middle-aged, male tech aficionados working in tandem with a complementary open-source community. These so-called “makers” espouse the trend toward personal production and the networking of things. Social utopians entertain dreams of re-possessing the means of production by the “masses”, tech enthusiasts the triumph of self-replicating machinery. The elation of a new age, together with goldrush-like optimism is palpable, notwithstanding that many young businesses soon will join the corporate world, fairly quickly abandoning their open-source ideals en route.

Still, 3D printing is not without history. Long before the internet changed the world, laser-based processes for industrial applications had been developed, e.g. for the manufacture of prototypes and models to be used in the production of limited numbers of work pieces and building components. Other than is the case with standard injection moulding processes, 3D printing bypasses the labour-intensive set- up of jigs, together with the various processes of cutting, lathing and drilling.

As an undeniable fact, the 3D revolution’s social and economic repercussions are making themselves felt. In times where the life cycle of products continues to compress while the number and variety of products inexorably expands, the tirelessly working printing robots producing complex objects at precision levels unmatched by mere mortals, are just what the doctor ordered. 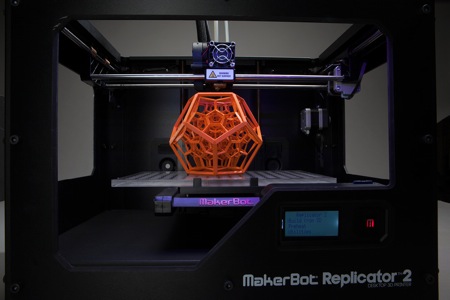 Especially in the field of tool system technology, construction component production, medical device technology and the consumer goods industry, 3D print technology occupies an immensely important place. For those reasons and on the occasion of K 2013 (the international trade show for plastics and caoutchuc), the Düsseldorf trade show and VDMA decided to launch the 3D fab+print in October, 2013. Under its umbrella, all relevant Düsseldorf trade shows will in the future bring together their respective exhibitors with the goal of moving the entire subject into the crosshairs of industry observers. Related shows featuring 3D fab+print are the COMPAMED (November 12 through November 14, 2014), taking place simultaneously with MEDICA (November 12 through November 15, 2014), the four standbys GIFA, METEC, THERMPROCESS, and NEWCAST (June 16 through 20, 2015), in addition to drupa (May 31 through June 10, 2016).

Consequences of the 3D revolution

3D printing not only supplants, reconfigures and leverages traditional processes, but accelerates innovation by virtue of the fact that an instant creation of solid prototypes and tangible templates has numerous benefits. In the consumer space, unit costs of mass-produced articles will always stay below those of customized manufacture, yet at the very margins, some share of the manufacturing process may well be taken over by the consuming public itself. It would hardly be a detriment to the economy, since these unaffiliated manufacturers still need 3D technology besides materials and support….at the same time creating brand new lines of business, e.g. printing services for those who are reluctant to invest in a 3D printer themselves. We all recall the unreal rates a square foot of digital printing on fabrics commanded back in its early years.

Hewlett Packard was the first of the large press manufacturers to enter the 3D printer business. Between 2010 and 2012, the US American IT company had struck an alliance with Israeli-American Stratasys. The result were devices with the names HP Designjet 3D and HP Designjet Color 3D, which however are no longer on the market. Now, HP is about to venture a second attempt. Meg Whitmann, HP’s CEO, made it a point to personally announce the initiative: “3D printers are still in their infancy”, stated Whitman. “It’s a great opportunity and we are very much committed. By the middle of next year, we will have something to show.” The strength of HP’s conviction may be somewhat debatable, though, since Ms Whitman stressed that actual revenue flow from the sector to the bottom line is a long way off. Indeed, patience is the order of the day, not the least because the costs of efficient 3D printers remain out of reach for many, as is the raw printing material, the variety and selection of which still leaves much to be desired. In addition, the currently available machines run at an agonizingly slow pace. Meg Whithman described it thus: “To print a bottle may take eight to ten hours. All quite interesting, but it feels like watching grass grow.”The hope for these birth pangs to be soon a thing of the past seems to be justified, however. 3D printing is more than hyping some pipe dream, but a veritable revolution of production technology. Right now, 3D printing is mostly limited to CAD supported laser cutters, lathes or injection moulding machines, yet new ideas have benefited all industries over time. Incorporating 3D printing into the canon of printing technologies as a fourth pillar next to letterpress, offset and digital print is the right thing to do; no half-way measures, please. Sing its praises in high schools, vocational training classes, professional associations, and especially, companies. Online print shops print on the strangest objects like Christmas baubles and coffee mugs. It only makes sense to also create certain objects according to customer instructions as the infrastructure and skilled labour is already in place. A realistic prospect to profit handsomely is certainly there. The time is now to define and hone business models, for as you sow, so you shall reap. The potential of it all is reflected when taking a look at the shares of Stratasys. Ten years ago, they sold for $7.58. Today, they change hands for $114 and an end to the rally is nowhere in sight.

Getting your feet wet in 3D printing is relatively easy. Building sets and apparatuses for beginners can be had for around 300 Euro. Professional machines sell for 3,000 Euro and up. But these machines, being used in industrial applications, are under a great deal of pricing pressure.Analogous to 2D printing equipment, three categories of machinery have also emerged in the 3D sector: for home use, for professionals, and for industrial application. Two dozen manufacturers from all over the world are currently offering solutions for the press floor. Most of them were inspired by the RepRap project, originally conceived by Adrian Bowyer, a professor for evolutionary research at Bath university in England. 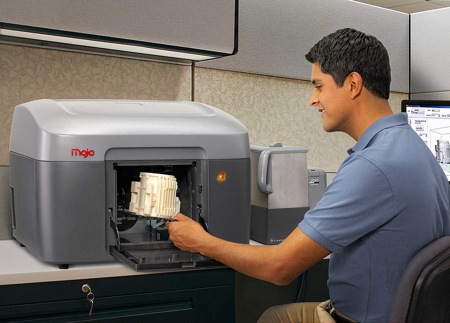 RepRap stands for Replicating Rapid-Prototyper and is a 3D printing press, the blueprint of which Bowyer had published under a GNU general public licence with the goal to achieve rapid proliferation. Vendors like Ultimaker and Makibox follow in its footsteps. The best-known American maker of 3Dprinters, Makerbot in NewYork used to be a non-profit organisation. Since 2013, it is a subsidiary of Stratasys and the current 3D printer model Replicator 2, unlike previous models, no longer bears any resemblance to the open source matrix.

The English manufacturer Bits from Bytes was also bought out. The company started with the 3D printer RapMan, a commercial version of the open source hardware RepRap Darwin. In October 2010, the enterprise was taken over by the leader in the consumer sector, the American company 3D Systems. The South Carolina based organization is currently firing on all cylinders. Resources for research and production at their main plant in Waterford Business Park of Rock Hill are at the limit of their capacities; for those reasons, 3D Systems plans an additional site creating up to 133 new jobs.

In the professional sector, Stratasys is the undisputed worldwide leader. The concern has two head offices in Eden Prarie (Minnesota, USA) and Rehovot (Israel) in addition to six branch offices, one of them in Rheinmünster near Baden-Baden, Germany. Stratasys’ product range extends from popular-priced desktop 3D printers all the way to large state-of-the-art 3D production systems. With 150 photo polymers and thermo plastics, it also features the largest assortment of special materials.

World leader for industrial applications in the sector Laser Sintering is the EOS GmbH in Krailling near Munich/Bavaria. Dr. Hans J. Langer and Dr. Hans Steinbichler founded the company in 1989. It supplies customers like MTU, EADS, Daimler and BMW with 3D-printers for their production sites. China supports its 3D printer industry through TierTime Technology Co. Ltd., founded 2003 in Peking. Their devices are marketed under the name Inspire. In short: whether high-end products, one of a kind, or small-scale series—the capabilities of 3D printers are advanced enough right now to perform many conceivable and as yet inconceivable tasks.

One principle, many processes

3D printing, also known as "Rapid Prototyping" or "Additive Manufacturing", is based on the layering principle, an additive process by which the objects to be printed are built layer upon layer from several liquid or powder-like substances. In its course, chemical and/or physical processes precipitating curing and/or melting take place. For those reasons, the typical materials used are artificial resins, plastics, metals, ceramics and paper. Manufacturers currently use a number of 3D print processes, which in their application are fundamentally alike except for a few patented variations. Among the most notable processes employed are selective laser melting, electron beam melting for metals, selective laser sintering for plastics, stereo lithography, digital light processing, polyjet modeling for photopolymers, and fused deposition modelling for thermoplastics. Most 3D printers at his time process only a single type of material or some kind of blend. There have been tests, though, to use plastics with different degrees of hardness and colour in a combined printing process.Industry giant Stratasys took out a patent on a variation of layering by melting, or FDM technology (fused deposition modelling). The FDM process melts delicate, semi-liquid strands of the thermoplastic acrylnitril-butadiene-styrol (ABS) with a spray nozzle, piling layer upon layer to eventually assume the final object’s shape. The PolyJet technology deploys photopolymers which are instantly cured under UV light and indistinguishable from products made by injection moulding.