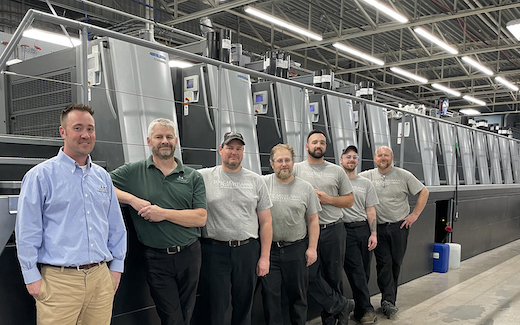 Kennesaw, Ga. – Founded as a commercial printer in 1947, J.S. McCarthy, Augusta, ME, is experiencing unprecedented growth in its folding carton business. The company, needing a faster and more reliable press to keep up with its increased production, recently purchased a new Speedmaster XL 106 from HEIDELBERG. The new XL 106, which runs at 21,000 sheets per hour and is the fastest rated sheetfed offset press in the world, will be the first of its kind to be installed in the United States.

The Fastest Press in the World

J.S. McCarthy has seen “extreme growth” in its folding carton business since deciding to go “all in” with packaging five years ago through $20 million in infrastructure and equipment investments. According to Jon Tardiff, CEO & President of J.S. McCarthy, the company is expecting a 50% revenue increase from folding cartons during the next 2-3 years. J.S. McCarthy, who produces paperboard packaging primarily for the food, pharmaceutical, and cosmetic markets, will install its new Speedmaster XL 106 late next year to replace an older press of competitive technology. Its current press is no longer a “viable back-up” for the company’s 2018 Speedmaster XL 106 that runs 24/7 producing all the company’s folding cartons. “We’re in a position where we basically have one press driving the entire plant. The new XL 106 is going to help us digest all this new growth,” said Tardiff. The record-breaking speeds and reliability of the new XL 106 will significantly increase J.S. McCarthy’s throughput, which is essential due to the plant’s space limitations. The company, who recently added onto its plant and is planning another addition for 2023, is looking to the XL 106 to help “get large jobs through the plant as quickly and as productively as possible,” said Tardiff.

HEIDELBERG recently introduced the higher speed option for its industry leading Speedmaster XL 106 platform. By increasing the printing speed to 21,000 sheets per hour, the XL 106 is now the fastest press in the world and is projected to produce upwards of 100 million impressions annually with higher net output than the 18,000 SPH model. J.S. McCarthy anticipates ramping up its production to 50-70 million impressions, based on its current average run length, within the first year with a goal of reaching the press’s maximum output in the future. To achieve higher speeds and net output, HEIDELBERG has optimized over 200 components throughout the entire system, from feeder to delivery. The improved components and advanced Speedmaster technology, like new intelligent User Experience (UX), autonomous Push-to-Stop technology, and AutoPlate Pro, help to significantly cut down on makeready and waste – contributing to J.S. McCarthy’s overall efficiency and sustainability goals. Additionally, this is a carbon-neutral press, which means CO2 emissions that are generated during press production are compensated for by purchasing climate protection certificates (Gold Standard). Further sustainability efforts from the company include having its plant 100% wind powered and being FSC® certified.

J.S. McCarthy first made the switch to HEIDELBERG’s Speedmaster technology in 2018 with the purchase of an XL 106-4+LYY-P+4+L. The machine replaced two older presses of competitive technology and when installed, increased the plant’s productivity by 50%. The machine, which is less than four years old, has already acquired 200,000,000 impressions and runs consistently at its top running speed of 18,000 sheets per hour. Since installing its first Speedmaster, Tardiff and J.S. McCarthy have not looked back: “HEIDELBERG continues to show its overall value through its proven technology and the ‘day in and day out’ productivity we see with the number of sheets to the floor we get every day,” said Tardiff. Upon installation of the new XL 106 next year, a UV model which will also include Prinect Inpress Control, the company expects even higher productivity gains than its first Speedmaster due to its higher speeds.

Since 1947, J.S. McCarthy has offered customers top-notch service, leading-edge technology, and high-quality products. As one of New England’s oldest and largest commercial printers, the company has been on the forefront of industry innovation, listening to what its customers need and providing them with solutions that make their businesses more successful. Strategically acquiring new technology throughout the years with an eye towards quality and meeting customer demand, J.S. McCarthy uses its commercial printing background to offer high-end folding carton packaging. Its investments in technology are matched by its investment in human resources. J.S. McCarthy is a 100% employee-owned company, where each and every member of its team has a vested interest in customer success because it directly relates to their success as business owners.