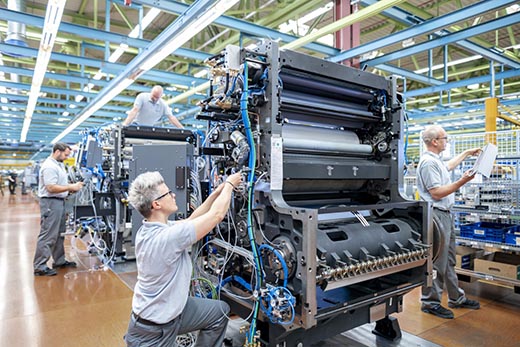 Given an improving order situation and the increasingly positive impact of the Group’s extensive transformation, Heidelberger Druckmaschinen AG (Heidelberg) is confident of returning to profitable growth in financial year 2021/2022 (April 1, 2021 to March 31, 2022). Despite the continuing uncertainties regarding the duration and scope of the negative effects of the COVID-19 pandemic in financial year 2021/2022, the company is therefore expecting sales to climb from € 1,913 million to at least € 2 billion.

“The comprehensive transformation Heidelberg initiated before the coronavirus pandemic hit has made the company leaner and more efficient. Given that demand is now also definitely picking up again in most key sales regions, we’re expecting to achieve a far better operating margin this year, including a slightly positive net result after taxes. The considerable growth potential offered by packaging printing, digital business models, business in China, and new technologies such as wallboxes is also making us confident about the years ahead,” comments Heidelberg CEO Rainer Hundsdörfer.

The company predicts that profitability will grow even more strongly than sales. For example, the expected increase in sales, the lower cost base, and the fact that significant restructuring costs of some 5.0 percent (including restructuring result) will no longer need to be met means the EBITDA margin is set to increase to between 6 and 7 percent. After two years of losses, a positive net result after taxes is also likely to be achieved thanks to a sustained improvement in the financial result.

Focus on profitable core business and expansion of growth areas
With solid economic development, this profitable upward trend looks set to continue in subsequent years, too. This is down to the company’s successful implementation of realignment measures, the focus on its profitable core business, and the expansion of growth areas. Cost savings totaling € 170 million are expected to have taken full effect in financial year 2022/2023 and the Group’s operating break-even point is likely to have decreased to around € 1.9 billion. Heidelberg sees considerable potential for sustained growth and increases in value in the future – above all for packaging printing, digital business models, business in China, and new technology applications. Heidelberg Wallbox sales, for instance, have helped more than double overall e-mobility revenue to over € 20 million and the company is working on a further massive expansion of its capacities in order to meet dynamic growth in demand. Despite the sums being invested in this expansion, its e-mobility business is already turning a profit.

“We’re delighted that all our efforts during the crisis in financial year 2020/2021 are now bearing fruit. Heidelberg is back on a solid financial footing, is fully focused, has become far more efficient, and is benefiting from excellent growth potential in various regions and areas of business,” emphasizes CFO Marcus A. Wassenberg.

FY 2020/2021 highlights include much improved profitability
Thanks to a strong final quarter, Heidelberg generated sales of some € 1,913 million in financial year 2020/2021, which was slightly above the range of € 1.85 billion to € 1.90 billion that had been adjusted in the third quarter of financial year 2020/2021. As already announced, the pandemic has resulted in the company failing by some margin to match the previous year’s figure (€ 2,349 million). Due to an uptick in demand – in particular in China, parts of Europe, and in the final quarter in the United States as well – incoming orders increased to around € 2 billion at the end of the financial year. In the fourth quarter alone, incoming orders improved very significantly, from € 462 million in the same quarter of the previous year to € 579 million. This increased the order backlog to € 636 million, which creates a good basis for the new financial year.

Clearly positive free cash flow of € 40 million exceeds expectations
The conversion of securities into cash – together with inflows from the comprehensive portfolio measures and significant improvements in net working capital – helped achieve a free cash flow result of € +40 million in the period under review. A positive figure of € 50 million was recorded in the fourth quarter. The previous year’s free cash flow (€ 225 million) was boosted by a one-time inflow of funds amounting to € 324 million from the return of trust assets. At the end of the year under review, the net financial debt remained low at € 67 million (previous year: € 43 million). As a result, leverage (the ratio of net financial debt to EBITDA excluding restructuring result) changed only slightly, from 0.4 to a very solid 0.5. The equity ratio fell to 5.0 percent, in particular due to the further marked reduction in the actuarial interest rate for the valuation of pension obligations in Germany, but this was significantly up on the figure of just 2.6 percent after the third quarter. The equity ratio for the parent company, Heidelberger Druckmaschinen AG, remains at a solid level of around 28 percent.

Outlook reflects increasing confidence despite uncertainties
After the order situation picked up considerably toward the end of the past financial year, especially in China but also increasingly in Europe and North America, Heidelberg is cautiously confident about the financial year 2021/2022 even in the face of the sustained uncertainty surrounding the negative impact of the COVID-19 pandemic. This positive outlook is shared by the industry association VDMA, not least since there are hopes that the business situation in North America will also see a sustained upturn.

While packaging printing quickly returned to pre-crisis levels and is set to see further growth, advertising printing is likely to take longer to recover from the impact of the pandemic. All in all, Heidelberg does not expect the global print volume to fully return to pre-pandemic levels just yet. Due to the systematic implementation of strategic measures in the area of packaging, the expansion of digital business models and the planned business growth in China in particular, Heidelberg will benefit from the recovery in these sub-markets and further strengthen its market position. This positive outlook is supported by the positive effects of the efficiency and transformation measures that have been initiated since spring 2020, which are already visible and set to increase. New business areas like e-mobility will also continue to grow significantly and drive the increase in enterprise value, even if they are unable to contribute substantially to consolidated sales for the time being. Given this, we currently expect sales to rise to at least € 2 billion in the financial year 2021/2022 (previous year: € 1,913 million).

In terms of EBITDA, the expected sales growth, the reduced cost base and the elimination of significant restructuring expenses will be offset by higher staff costs and the non-recurrence of income from the package of measures in connection with the transformation program. However, a considerable portion of the income that was generated in this respect in the financial year 2020/2021, including from the reorganization of the company’s pension plans and gains on company disposals, will already be replaced by sustainable operating income. As part of its focus on profitable core business, Heidelberg expects to record further income from asset management in the financial year 2021/2022 on the basis of ongoing projects. As the amount and timing of the gains on the planned transactions cannot yet be estimated with reasonable assurance, the EBITDA margin is currently forecast at between 6 and 7 percent, which would be higher than the prior-year level (around 5.0 percent including restructuring result). As a result of the considerable reduction in financial liabilities, Heidelberg expects to see a sustained improvement in its financial result and, accordingly, a turnaround in its net result after taxes to a slightly positive figure. Leverage is expected to remain at the low level recorded in the financial year 2020/2021.

Break-even to be lowered significantly to sales of around € 1.9 billion by financial year 2022/2023
The EBIT break-even, which amounted to sales of € 2.1 to 2.2 billion prior to the pandemic, will be sustainably lowered to around € 1.9 billion by the financial year 2022/2023. This will significantly improve the company’s future profitability. Of the savings that are expected to result from the ongoing workforce reduction in particular – which will amount to € 170 million in the financial year 2022/2023 – around € 85 million were already realized in the year under review. This figure will rise to € 140 million in the financial year 2021/2022, around 90 percent of which will be attributable to sustainable measures. In the medium to long term, the company assumes its reorganization measures, its focus on profitable core business and the expansion of new growth areas will help to sustainably improve its future profitability and its financial resources for further growth. In turn, this will allow it to report substantially positive free cash flows.

The financial statements and Annual Report for financial year 2020/2021, image material, and additional information about the company are available in the Investor Relations and Press Lounge of Heidelberger Druckmaschinen AG at www.heidelberg.com.