Demand for charging solutions for electric vehicles in private use is growing rapidly. Current market analyses predict annual growth of over 20 percent. Heidelberger Druckmaschinen AG (Heidelberg) is already one of the most successful wallbox suppliers on the German market. To serve the rising demand in this sector more effectively and thus strengthen its market position even further, Heidelberg has now taken into operation a second production line for the manufacture of its wallboxes at its Wiesloch-Walldorf site. In doing so, the company is planning to roughly double production capacity by April this year. Heidelberg is now manufacturing the Heidelberg Wallbox Home Eco and Heidelberg Wallbox Energy Control models with various cable lengths and customization options for the German and European markets in two-shift operation on two production lines.

“The market for wallboxes is booming. Our production capacity is being used to the full and we’ve established ourselves as a successful supplier on this market of the future. By taking into operation a second production line, we can respond to the high customer demand more effectively. In doing so, we’re systematically pursuing our growth plans on the highly promising electromobilty market,” says Heidelberg CEO Rainer Hundsdörfer.

Growth market of electromobility - Heidelberg further expands charging systems portfolio with focus on European market
Heidelberg began production of the Wallbox Home Eco, a model for quick and easy charging in the private and semi-public domains, in summer 2018. Following the sales launch in Germany, from this year it is also selling the model through intermediaries on numerous European markets. In fall 2019, the model came out top in comparative testing by German automobile association ADAC. This was followed in October 2020 by the unveiling of the Heidelberg Wallbox Energy Control with integrated load management. Networked to support simultaneous charging of as many as 16 electric vehicles, it thus provides an attractive charging solution for apartment buildings, multi-vehicle garages, and company/hotel parking lots. Grants of EUR 900 are currently available from KfW Bank for the purchase and installation of such equipment in Germany. The company is manufacturing both Wallbox models to proven Heidelberg quality standards, with a high-end stainless steel front for the Wallbox Energy Control. With an RRP from EUR 490 for the Wallbox Home Eco and EUR 790 for the Wallbox Energy Control, Heidelberg therefore offers one of the best value for money private charging systems on the market.

In the last two years, Heidelberg has already supplied customers with over 35,000 Wallbox systems. The company is also planning to significantly increase sales volumes amid the continuing growth in demand.

“We’ve got big plans for electromobility, including for the coming financial year. Given the growing appeal of electric vehicles in many European countries, we’ll be significantly expanding our sales activities on those markets,” adds Hundsdörfer. “The quality and value for money are just right and are set to win over many new customers.” 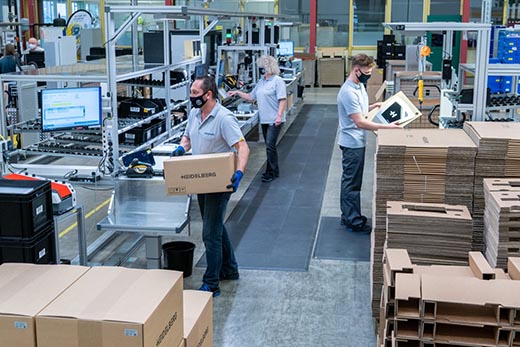 Booming demand for electromobility – Heidelberg has taken into operation a second production line for wallboxes at its Wiesloch-Walldorf site.