SG360° Leans on Ultimate Impostrip® to Scale Up VDP Productivity 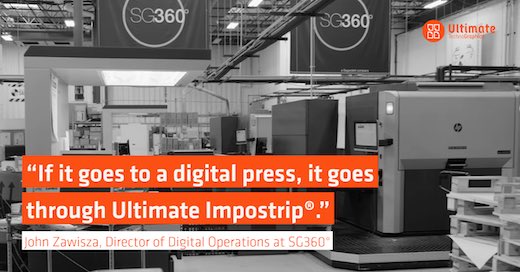 Montreal. Canada. Ultimate TechnoGraphics, leader in imposition and finishing automation software, is proud to work with SG360°, one of the top Direct Mail printing companies in North America. In a recently filmed customer testimonial by Inkish.tv, SG360° explains how they impose and produce thousands of print-ready files daily for their entire digital printing division across multiple plants using Ultimate Impostrip®. By implementing Ultimate Impostrip®, SG360° has grown their print business and now runs approximately 13-20 million clicks per month in total and 98% is variable data printing (VDP).

As with anything, there are a range of variables that influence growth potential. For over 65 years, SG360° has thrived by responding to the changing needs of their diverse client base. What started as a regional commercial printer is today a national, industry-leading provider of direct marketing solutions. John Zawisza, Director of Digital Operations at SG360°, implemented Ultimate Impostrip® years ago when they started receiving larger variable jobs. Since then, he has witnessed the impact of this breakthrough technology in all areas of the business. The solution has grown and scaled with the company throughout the years and plays a key role in their print workflow.

Since implementing Ultimate Impostrip®, SG360° has transformed the way they are managing their workload. Operators now simply pick up a job, drop it in the appropriate imposition flow and feed their own process: “Our team does not sit idle waiting for prepress to end up giving them something to print. Ultimate Impostrip® can run 10-12 different jobs at the same time and route them to the different presses. Once you create something in a hot folder, it doesn’t matter who gets the files, once they drop it in that hot folder, it’s going to end up being imposed. Ultimate Impostrip® adds so much value in delivering consistency and ease of use and has allowed our operations to be much more flexible.”

The Chicago-based printer eliminated most of their downtime on the presses with Ultimate Impostrip®. They are no longer waiting for files to end up coming out because they need to be imposed, as Zawisza mentions: “There are other standalone imposition solutions out there, but they do not have that type of automation which can cause press down-time and that’s not acceptable. Having Ultimate Impostrip® enables us to accumulate jobs and now my people are actually pulling work in, instead of having jobs pushed at them.” In addition, Zawisza revealed that in their previous imposition tool, jobs would take hours to impose. Then, when they ended up putting it through Ultimate Impostrip®, it went down to minutes!

Reliable Automation is Key to Grow

“Ultimate Impostrip® has allowed to scale our business”, says Zawisza. “It has grown with our production and the fact, that it allowed my entire department to grow, was one thing that I didn’t have to worry about. When I’m getting new technologies in here as far as presses, new staff and trying to adjust workflows, Ultimate Impostrip® is one thing I do not have to worry about. We are able to throw anything at it and it will actually keep up and surpass the process.”

To watch the full SG360° video testimonial and learn more about the different kinds of impositions they do using Ultimate Impostrip®, please visit: www.imposition.com/testimonial/imposition-speed-sg360.