The US Commerce Department reported that commercial printing industry shipments are up for 16 consecutive months in current dollars compared to the same month of 2014. 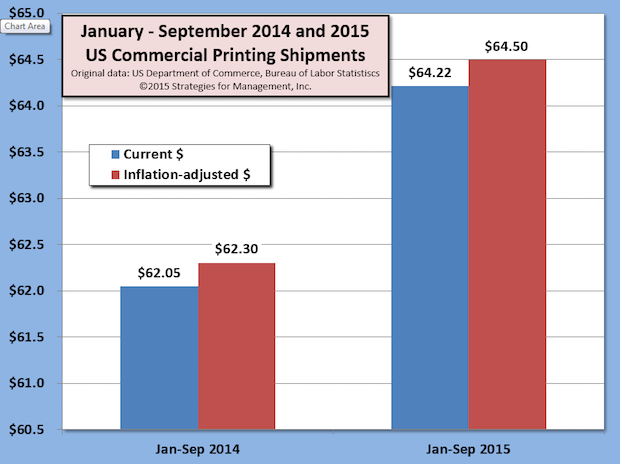 The US Commerce Department reported that commercial printing industry shipments are up for 16 consecutive months in current dollars compared to the same month of 2014. Because inflation is low, this is one of the best real growth periods the industry has had in almost twenty years.

The Commerce Department data show that current dollar printing shipments for September 2015 were $7.59 billion, +3.2% compared to 2014, and +3.0% adjusted for inflation.

The industry has now registered seven months of shipments more than $7 billion. This is the longest number of months greater than the $7 billion level since the ten month period of March to December of 2010.

August shipments were revised down by -$40 million, but were still +$188 million compared to the prior August.

The 12-month-moving-total of inflation adjusted shipments is now greater than $86.2 billion, the highest level since February 2012. Inflation-adjusted shipments are growing at a rate slightly better than US real GDP.

Though the industry has contracted since the late 1990s, the +3% growth rate in the 12-month-inflation-adjusted shipments is the best industry growth rate since 1996.